We have some exciting news for those of you planning to pick up the dual-core equipped Motorola Atrix smartphone on release, as it looks as if online retailer Amazon may have revealed pricing a little prematurely.

If you didn’t know already, Motorola are calling this handset the ‘most powerful smartphone in the world’ and with a dual-core 1GHz Tegra 2 processor at the helm, it’s certainly going to pack a few punches. Other key specs include a 4-inch capacitive gorilla glass touchscreen, a 5 megapixel camera with 720p video recording, 16GB of internal memory and Android OS 2.2 Froyo running with Motoblur UI.

As reported from Engadget, Amazon recently posted pricing details for the handset, before quickly removing them once they caught on to it. Luckily for you, we have the details before they were pulled. The Atrix will be on sale ( Amazon at least) for $150 on contract, or $599.99 if you choose to go down the off-contract route.

Further details also revealed that the handset will be launching on February 11th, which isn’t long at all if this information turns out to be true. What are your thoughts on the leaked information, we feel the $150 contract price is very reasonable for a dual-core Tegra 2 handset. 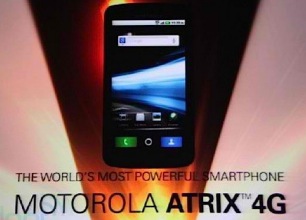 However, we’re a bit disappointed that this handset won’t be coming with Android 2.3 Gingerbread at least. How long are manufacturers going to release new handsets in 2011 with Froyo – it definitely needs to end somewhere. You may be a bit frustrated that the handset wont come with a better camera sensor than 5 megapixels too.

Give us your opinions on the handset so far – will you be getting one?