If you’re more a fan of racing-based video games than you are of first-person shooters such as Call of Duty and Medal of Honor, then you may be waiting for the upcoming MotoGP 10/11 game to arrive. If that’s the case, then you’ll be pleased to know that new screenshots and a trailer are now available.

With this year’s Consumer Electronics Show (CES 2011) currently taking place in Las Vegas, Capcom has decided to take the opportunity to reveal more details about the upcoming motorcycle racer. This of course includes 10 new screenshots, according to Paulmichael Contreras at playstationlifestyle.net. 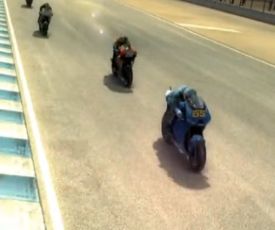 Not only does the MotoGP 10/11 game feature a co-operative career mode, but it also features online multiplayer mode with support of up to 20 racers. The new screenshots include images taken from gameplay footage, as well as a couple of images that appear to show the menu screens.

If the screenshots aren’t enough to whet your appetite, then you might want to check out the recently-released trailer that has been posted by Steve_OS over on the operationsports.com website. Is MotoGP 10/11 a game that you can see yourself buying?