Many ordinary people and gadget lovers dream from time to time about what they’d buy if money were not limited, thinking about having millions in the bank, or even billions. Life has a lot to offer for those that love material things, from gold plated products to really expensive cars, jets, and boats.

While most of us have to dream about the expensive products on offer, some people have the millions needed in the bank to actually buy them. While business owners with billions are not always in the public limelight, celebrities are always the focus of the public and when they buy the latest expensive gadget, it makes the headlines.

So what are the most expensive celebrity purchases? One celebrity hitting the news lately was Soulja Boy, and they do not come much bigger than his rumored purchase of a $55 million G5 jet for his 21st birthday, which was quickly denied by a spokesperson for the star. While we’ll have to take their word that he did not spend millions on a jet, it does make you wonder if he really did, and certain press have asked him directly and been told he did buy the jet. Guess we’ll find out soon enough.

Something less expensive was a gold plated iPhone, which Victoria Beckham purchased for the small sum of £22,000. Then we have 22-year-old Petra Ecclestone getting a nice $85 million home, as the name reveals, she is the heir to the owner of Formula 1. JK Rowling has plenty of money but Warner Bros were kind enough to reward her with a 40-diamond bracelet as a thank you for the success of Harry Potter, while we are not sure on the price, it has been said to be in the millions.

What have you seen celebrities buy with their millions, and if you had the money what would you buy? 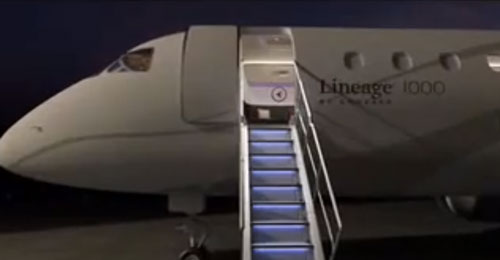