Discussion focusing on the Mortal Kombat X tier list started early after the game released and voting in a number of polls is well underway. It’s clear the order of new characters is being judged with a pattern emerging after voting by thousands, and this reveals the likes of Ninjitsu Scorpion, Nimble Reptile, and Outlaw Erron Black topping current player decided results.

You can see one Mortal Kombat X tier from Event Hubs below that considers tiers for all characters. At the time of writing, we see the characters mentioned above taking top spots and low tier characters positioned like Hollywood Cassie Cage, Full Auto Jacqui Briggs, Ruthless Ferra/Torr, War God Kotal Kahn, and even Cryomancer Sub-Zero. This shows newbies how important it is to make the right choice when choosing options for your character. 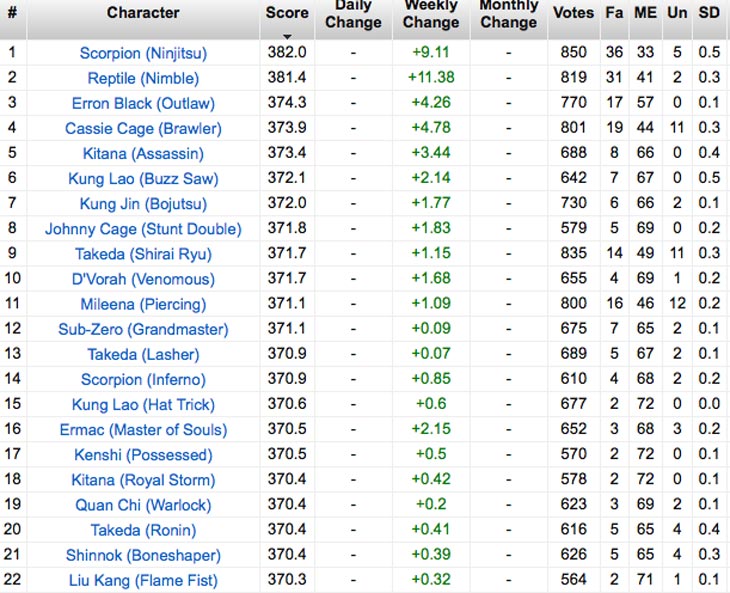 Sub Zero is a longtime favorite for many gamers and you might quickly learn that this character is all about the combos, rather than doing big damage in MKX. Some find Sub Zero to have below-average damage, but dependent on the play style you could deliver massive blows using the right combos and selection.

Bottom-line: For many, tier placement isn’t a big deal as long as you enjoy the game and focus on skill. Any character can be considered the right choice with the right play style and skill. What’s your thoughts on Mortal Kombat X tier placement and the best characters to use? We would also love to hear your thoughts on the current voting, which reveals positions and styles as seen in the screenshot above.