Following on from the successful mobile release of Injustice, Warner Bros has just announced Mortal Kombat X Mobile as well – with NetherRealm Studios’ latest game on the way to iOS and Android devices.

The big news is that NetherRealm is developing the mobile version game themselves, which is a rarity in itself since mobile ports are usually drafted off to a third-party developer to handle.

Not this time though and you can check out the first Mortal Kombat X Mobile trailer below. It features some fantastic graphics and many of the characters and features from the console version which is coming next month.

What we wanted to talk about though is some teasers that NetherRealm seem to have thrown in to the trailer for fans to spot. Particularly a look at what could turn out to be Takeda Takashi’s Ninja alt at the 0.45 mark in the trailer below. 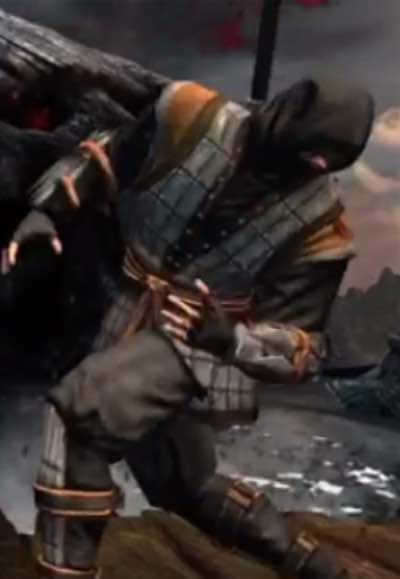 If you didn’t know, Takeda Takashi is already confirmed as a character in the console version and is the son of blind swordsman Kenshi.

However, he’s also the student of Hanzo Hasashi – otherwise known as Scorpion. This could be a look at Takeda’s Scorpion style costume in the mobile version and as far as we’re aware – we haven’t seen it anywhere else before this trailer.

Who knows, it could even turn out to be a mobile exclusive offering some incentive to play. It’s also worth pointing out that Warner Bros has confirmed that if you play the mobile version of Mortal Kombat X, you can unlock some content for the console version.

Does that mean that this Takeda costume can be brought over to the main game, assuming that it’s a Takeda alt costume of course?

Very interesting nevertheless. Take a look at the footage below and let us know if you are interested in the mobile version or not.

If this is not Takeda, then who else could it be?