After weeks of silence regarding the Mortal Kombat X Kombat Pack 2 release date, we could be on the brink of something very exciting next week.

As most of you know, NetherRealm has only confirmed that the KP2 for MKX will be out early 2016. They haven’t said an exact date, nor given any indication whatsoever on who the four characters in the Kombat Pack 2 are.

Just hours ago, Ed Boon retweeted a post from the official Mortal Kombat X ESL league account which has stated the following: 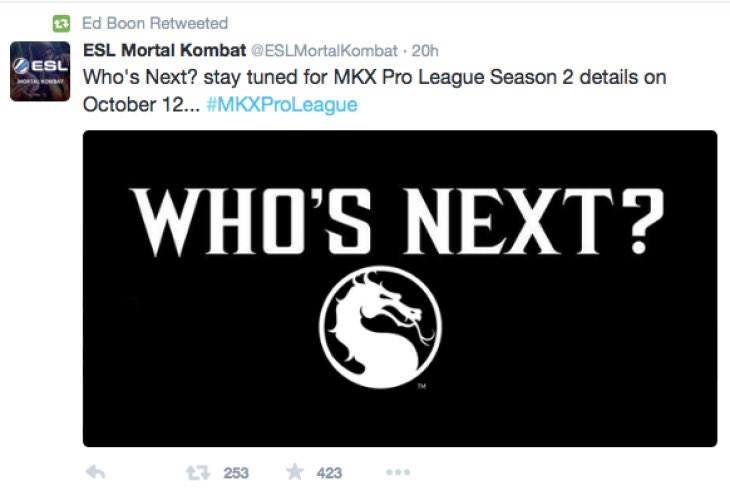 As you can see it suggests that something related to ESL play within the Kombat Pack 2 will be announced on October 12 – that is just six days away.

The most interesting thing for us, is that the ESL account has also put ‘Who’s next?’. That implies that they have a character to show and this could be NetherRealm’s way of increasing interest in making MKX one of the superpowers of the ESL leagues – if it wasn’t already.

If they are simply announcing nothing relating to new characters, or a release date and only just giving out details on new ESL features – then putting ‘Who’s next’ at the start of the Tweet sounds like a major troll towards fans and we have a feeling that many fans will think the same.

Given that it’s now October though and we still don’t know who is coming, revealing the first character sounds about perfect right now.

Either way, you definitely want to tune in on October 12 to see what the big surprise is. Have you already decided who the four characters should be? Give us your dream picks below.