We knew it was only a matter of time until the barrage of Mortal Kombat X news came in. After all, the game is due out this April and we still haven’t had the full Mortal Kombat X roster reveal yet.

With this in mind, Ed Boon is now teasing new characters for Mortal Kombat X once again. The co-creator of the franchise has confirmed that this week, or specifically on Tuesday we should be getting the next character reveal for the game.

This is because Ed Boon sent out the Tweet below around 6 hours ago saying that tomorrow is going to be a fun day for Mortal Kombat X fans. 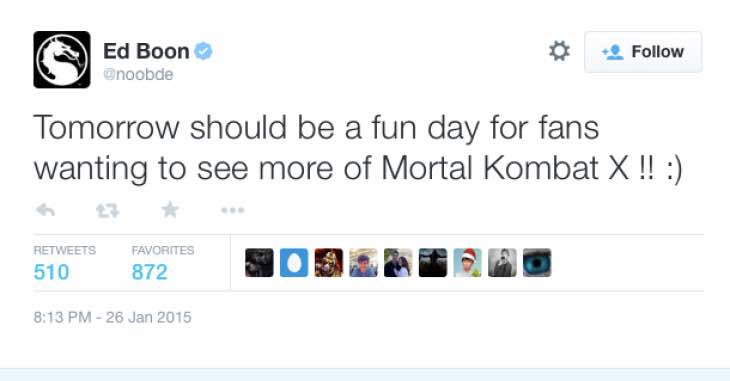 On top of this, there’s also going to be a separate Mortal Kombat X live stream this Thursday on January 29, where another new character reveal will take place.

We were obviously starved of information over the last month or so, but now we can see that Netherrealm is making up for it.

The question is, who’s next for Mortal Kombat? We’ve just had Kung Lao and Kitana enter the tournament, while speculation is brewing that Nightwolf could be next.

Give us your thoughts on the game at the moment and your predictions for the TWO character reveals this week.