We have some very important news for MKX fans now, especially to those who are yet to pre-order the game. You already know that each Mortal Kombat X pre-order will offer Goro as a playable character, but now Warner Bros has detailed the Mortal Kombat X Collector’s Edition bonuses as well.

The big prize on offer is a Gold Scorpion figure, which has been designed by Coarse. It looks amazing and you will be able to have yours by pre-ordering one of two Mortal Kombat X Kollector’s Editions.

As a result, we can now confirm that the Mortal Kombat X Collector’s Edition price will be either $149.99, or $179.99 as there are two premium editions.

Both will come with the gold Scorpion figure, a copy of the game, a gold scorpion in-game skin based on the figure and the Mortal Kombat X Kombat Pack which includes access to four new unannounced characters – we’ll talk about those in a separate article. 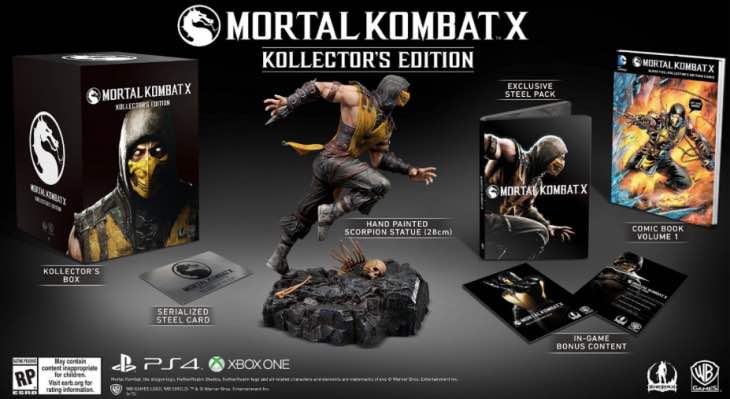 As for the differences between the two Mortal Kombat X Kollector’s Editions, the $179.99 comes with a different hand-painted Scorpion figure that hasn’t been designed by Coarse.

It also comes with an Exclusive Steel Pack, Steel Card and access to Volume 1 of the Mortal Kombat X comic book that was released recently online.

We can see that Amazon are now listing both versions on their website in the US, although only the Coarse Edition is available to pre-order now.

In total there are four different versions of Mortal Kombat X, but we are focusing on these two as they are the most expensive editions. Check out the images of both in detail to have a preview of the figures that you get, plus the extras.

Are you planning to drop either $149.99 or $179.99 on one of these ultra premium editions? We have to say that the Coarse Scorpion figure is sexy as hell, excuse the pun – the in-game skin is the icing on the cake.