There’s three new Mortal Kombat X characters being teased within the E3 2014 gameplay trailer, although the character names haven’t been revealed just yet. The first two MK10 characters are obvious, one being some sort of buy lady and the other might even receive the name Master Blaster Jr.

The full Mortal Kombat X character roster is yet to be revealed with all names, but what we’ve seen so far excites us for a PS4 and Xbox One release alone. Some people are debating the graphics quality for the new generation and PC, but that’s a debate we’ll let our readers discuss in the comments. 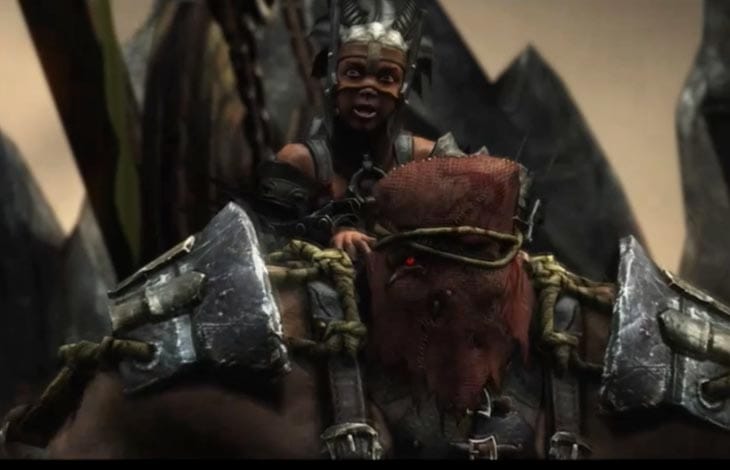 You can see the E3 2014 trailer for Mortal Kombat X below this article. You’ll also get a glimpse at a fight between Scorpion and Sub-Zero, which takes place in a pre-rendered visual within a snow covered forest. Another new feature is the ability to use items within the MKX environment, so keep an eye on E3 to see exactly how this will work.

This game is known for its gore and fatalities, also the graphics should be enhanced to a higher level on PC, Xbox One, and PS4. This will be one game fans will find it hard not to purchase, especially when playing at home with friends for some good old arcade style fighting with button bashers also welcome.

We also note a third character seen during the fatality montage towards the end, and you’ll notice his body covered in neon colored tattoos as an Aztec looking warrior. You will see this third character drinking Scorpion’s blood, although the game is some time away with Mortal Kombat X not receiving a release date until 2015.

What names would you like to see these 3 Mortal Kombat X characters receive? Bug Lady, Aztec Neon, and Master Blaster Jr. could work well in our opinion. Have your say in the comments after watching the video below.

You should watch the pre-E3 Mortal Kombat X video teaser where Scorpion beats Sub-Zero, if you missed it that is.