It has been a long time coming, but finally we have the Mortal Kombat X Kombat Pack 2 trailer to show you. More importantly, the very first Mortal Kombat X Alien gameplay and also a fatality tease too for those that want to know what kind of final move the Xenomorph will have.

It looks like NetherRealm may have already teased Alien’s fatality 1 and fatality 2 in the same trailer – although, the jury is still out on this.

Take a look at the image below which looks like it is the first fatality. A classic Alien finisher, where the mouth opens and the nasty critter inside thrusts straight into the head of the opponent – brutal, but an expected move. 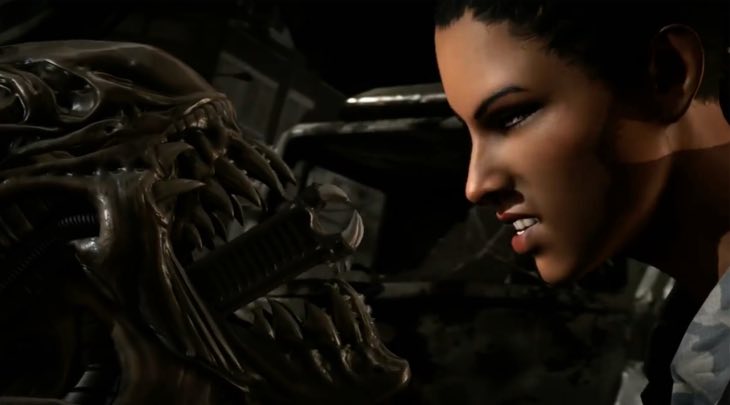 Now the second image is a lot more interesting. We see the character tied up in Alien goo and this one shows the baby Alien bursting out of the chest of the opponent – Ripley style.

We’re not sure if this is the second fatality, or just an outro scene that NetherRealm has put in there for added effect after winning. It would seem strange for the developers to put both fatalities into the first trailer, so we have a feeling that the second one may still be a secret.

Watch the entire MKX Kombat Pack 2 trailer below and let us know what you think of it. Are you pleasantly surprised that the Alien combat mechanics look so smooth, since many said that NetherRealm wouldn’t be able to do it!