Earlier on this year, we asked for your opinions on the new Mortal Kombat game just as it had been released with regards to a comparison with fellow franchise Street Fighter. Now though, we have some official comments on the possibility of a MK vs SF game becoming reality, and also our thoughts on that game which many of you would consider to be a ‘dream’ title.

Firstly, if you want to check out the results of a poll we ran back in March asking which franchise was better between MK and SF, you can take a look at that article here. Moving on though, as we have had some pretty exciting comments from Yoshinori Ono, who has been the producer for many of the Street Fighter titles down the years.

When speaking in an interview at the world famous EVO fighting tournament, Ono revealed to the US PlayStation Blog that he reguarly receives requests on his Twitter feed to make a Street Fighter Vs Mortal Kombat crossover game at some point in the future. While not exactly ruling the idea of this out completely, he did have some interesting comments to make as you can see below:

”I actually get a lot of requests for Street Fighter vs. Mortal Kombat on my Twitter feed and elsewhere. I understand why people want it, but it’s easier said than done. Having Chun Li getting her spine ripped out, or Ryu’s head bouncing off the floor….it doesn’t necessarily match.”

As you can see, it does seem that Ono isn’t too keen on the idea due to the complexity of making such a title and the fact that Mortal Kombat-style fatalies for Street Fighter characters wouldn’t really work in a game. It would probably also upset quite a lot of hardcore Street Fighter fans who will want to keep the series untouched, although at the same time – Capcom has also proven that they are open to the possibility of a crossover game providing that the mechanics of the game can work both ways.

Street Fighter X Tekken is of course the crossover game we’re talking about, and you can recall that the creators of Mortal Kombat also have a crossover game on their books in the less-received Mortal Kombat Vs DC Universe game which had to be stripped of the essential MK violence factor so that it could get a teen rating, leading to a lot of criticism amongst fans. 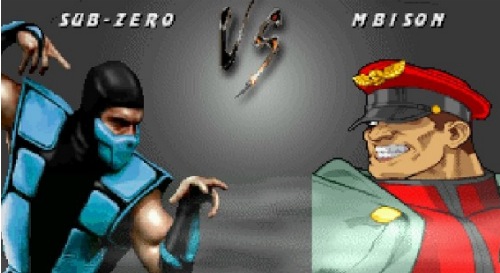 With this in mind, would gamers really like to see a Mortal Kombat Vs Street Fighter game in the future, knowing that MK Vs DC bombed in terms of success? NetherRealm studios are doing a great job with MK at the moment, and Capcom seems to have found a nice formula with Street Fighter X Tekken. Should it be left at that, or do you think an MK Vs SF title is a definite possibility in a few years to come.