It has been rumored to be coming for a long time during 2010, but now we can finally confirm that it’s real. Warner Bros and NetherRealm Studios have officially announced that Mortal Kombat is coming to the PS Vita and even better news, it will come with brand new features and exclusive content not seen on console.

There’s no official title other than Mortal Kombat, so we’re guessing that rumored ‘Vitality’ tag has been ditched. We don’t have an official release date from NetherRealm, but the company has said to expect the game to release sometime during Spring.

The official press release from Warner claims that there will be exclusive content and brand new gameplay features, but the box art already revealed confirms further good news that Vita owners will get to play as God of War character Kratos, as well as the four DLC characters in Rain, Kenshi, Scarlet and Freddy Krueger that released for the console versions.

In a statement from Ed Boon, the main man at NetherRealm Studios, he stated that the team intend to create ‘an equally compelling experience on the PlayStation Vita’. We’re guessing by that he means that the Vita version will get all of the core features of the console version, including the excellent story mode and also the new features and exclusive content mentioned above.

It will be fantastic if the Vita has some exclusive characters not seen on console, that really would be a great incentive to pick up Mortal Kombat on the Vita if you didn’t already play it on Xbox 360 or PS3. We’re guessing that a lot of you are going to be buying this now, so what characters and features would you like to see on the portable version?

On a side note, the box art image below also confirms that you’ll need to reserve 3MB of memory for game save purposes. Just as we mentioned in a previous article this week, it’s clear that the 4GB memory card isn’t going to be enough to store multiple games on your system though, especially if you plan on going digital with many titles. 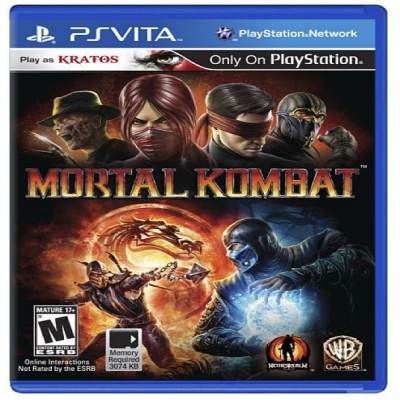