We have some exciting news for those of you who are planning to pick up Mortal Kombat on either the Xbox 360 or PS3 this year, as a new video released for the game has also confirmed the availability of four new characters who were previously unannounced.

NetherRealm Studios, the developers behind the game, have released a new video, in which they go behind the scenes on how they created the new x-ray moves which fighters will be able to perform in the game, which each fighter having a unique x-ray move based on his or her characteristics and fighting style.

However, the video revealed a lot more than fans had expected, as they also confirmed the inclusion of four previously unannounced characters into the game. We’re not sure if this was intentional by the developers, but fans won’t care. This said and done, you’ll be pleased to hear that Liu Kang, Ermac, Jade and Goro will be featured in the game.

It was pretty obvious that Liu Kang, the legend would be coming back for the new reboot, but we’re definitely surprised to see Goro in the mix – the video even shows what Goro’s x-ray move will look like, quite brutal if we may say so!

We wonder who else will be added to the growing character list? You can check out a rumored list of characters for the game here. We also gave you confirmation of Kratos appearing exclusively for the PS3 version. 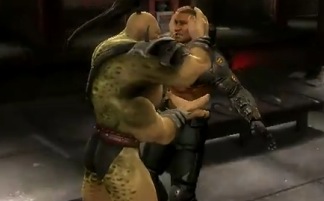 Personally speaking, I’m still hoping for the likes of Kabal and Shang Tsung to be introduced. Don’t forget that it’s very likely that more fighters will be coming via DLC after the game is out. Check out the video below and let us know your thoughts on the addition of Liu Kang, Ermac, Jade and Goro.