We have some exciting news for Mortal Kombat fans now, as a report on a French website has seemingly leaked the official box art for the PS3 edition of the rumored Mortal Kombat HD Kollection, as well as a few other juicy details.

According to this report from JeuxVideo, Mortal Kombat HD Kollection will be out on the PS3 on November 18th, priced at 30 Euros.

Interestingly, they have also obtained a screenshot of the ‘official’ box art, which includes a Sony 3D logo. If that wasn’t enough for you, they claim that the HD Kollection will also feature a demo of the upcoming Mortal Kombat 9 game, which would obviously be a major incentive for PS3 gamers. 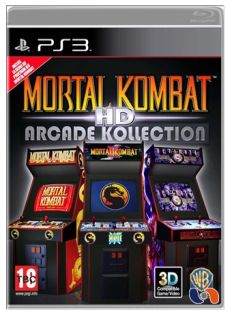 I’m most excited about the 3D part though. Does it mean that the packaged games (MK1,2 and UMK3) will be available in 3D, or just the Mortal Kombat 2011 demo in 3D? It seems likely that it is just the demo, but you never know.

This is just a rumor now until everything is confirmed. Let us know your thoughts on this. Has the 3D and MK9 demo additions made this game a must buy for you?