Following on from the huge news about Freddy Krueger coming to Mortal Kombat, we feel that it now opens up a wealth of possibilities for NetherRealm Studios to include even more non-Mortal Kombat characters in to the game.

We’re guessing that you were just as surprised as we were when we heard NetherRealm Studios announce Freddy Krueger as the fourth DLC character at Comic Con 2011 over in San Diego. Well, he’s definitely official and he’ll be coming to the PS3 and Xbox 360 on August 9th – full details on that, as well as how it relates to Marvel Vs Capcom 3 DLC in our previous article here.

With that in mind, we now want to focus our attentions on what DLC characters could and should be announced in Mortal Kombat following on from the release of Freddy Krueger, as we’re pretty sure he won’t be the last DLC release for the game. As you can see in the image above, one possible addition could be pinhead from the HellRaiser movies. You may think that this is pretty farfetched, but considering that NetherRealm Studios are willing to go outside the box and include someone like Freddy Krueger, the possibilities really are endless.

Again these are pretty long shots, but what about including the Alien and Predator into the mix? Ok maybe not since they need to be real people so to speak and have a proper background so they can tie into the Mortal Kombat story, but we’re sure NRS are thinking about the next character already, and we can’t wait to see who they add after Freddy.

One possible character that we can definitely see in Mortal Kombat is Michael Myers, the villain made famous in the Halloween movies. He could be a direct rival with Freddy Krueger, although you may think that Jason needs to be included if we’re talking about rivals for each character.

If we had to pick four movie based characters to be included in Mortal Kombat as future DLC, our picks would be Pinhead, Michael Myers, Jason and Scarface. Obviously we don’t expect NRS to include all four, but even just one of these characters would be awesome. What do you think about our picks, do you have any other possible ideas for future DLC characters as we’d love to hear your input on this. 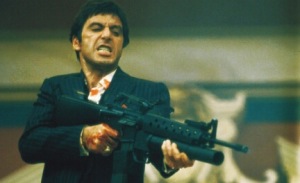