The latest game in the Mortal Kombat series has been out for over two months now on the PS3 and Xbox 360, and this has led to a stream of videos being uploaded to YouTube by users showing off their skills. The extreme violence has resulted in a ban for Australia, and both shock and joy from gamers. The fatalities are amazing, from splitting the other player in half by pulling them apart to chopping body parts away, it’s combat gaming that tests what should be classed as acceptable.

There are many types of players in MK9, although they fall within two main categories, and these are players with a slow mind and players with a fast mind. Mortal Kombat is about timing and performing moves after seeing the opponent make a move that you can counter. The slow minded player will perform set moves ahead of time in their head, and then carry them out regardless of what might happen. The fast minded player will adapt in a split-second, changing what they plan as opportunities arise. In most cases the younger the player, the faster the reactions, and having played MK9 for well over 20 hours now, I sadly fit into the slow category. Where do you stand?

The idea of a slow mind and a fast mind then leads to what potential each player has in MK9, can a slow player learn to get faster with their reactions so they respond in a split second, or is this not possible for some people? It’s our view that some people, myself included at 34-years-old, will reach a limit much sooner than a 20 year-old with a faster mind, although there are some exceptions to this rule.

If you think slower in MK9, then you’ll find ways to combat this problem and one way is to be unpredictable. While you shouldn’t button bash, a little unpredictability and random movements will confuse some of the most experienced players. 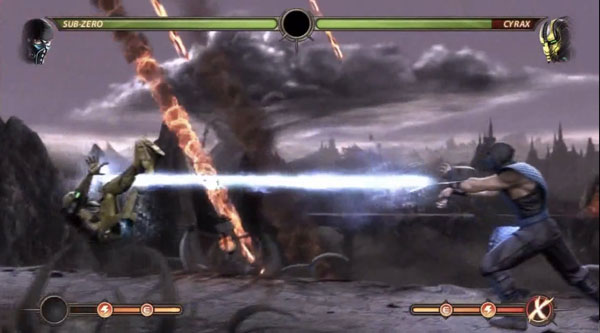 Mortal Kombat 9 combos are found via a list in the game menu; here you can learn one combo and find ways to combine them with other combos and moves, which creates double figure hit combos that destroy the opponents health. You can see a list of videos below this article; the first video shows a Noob Saibot 59% combo that uses the wall. This is impressive but also controversial with some players, with claims that these combos are situational and leave you extremely vulnerable when missed. Having performed these wall combos, we can confirm that you’ll get opportunities with the wall, and if performed correctly, expect over two thirds of the other players life to disappear. Do you like using wall combos?

The second MK9 video shows a compilation of Sub Zero combos, and these are also impressive. Being able to freeze the other player gives Sub Zero a little more time to perform combos than some of the characters. Have a look at that video and the others we’ve posted below (Kenshi and Scorpion compilations), and then let us know what you think of the combos. You can see two more videos for Liu Kang and Noob Saibot in this post here, and also some breaking news on MK10 in this article.

Are you a slow-minded or fast-minded MK9 player?