We’ll bet that there are thousands of PS3 and Xbox 360 gamers that have been converted to Mortal Kombat 9, and this includes Street Fighter fans. This includes us and while it’s hard to put a finger on what part of the game really makes it addictive, we’re sure the extreme gore, and consistent character updates help.

Over the last couple of weeks we’ve reported details about the new Freddy Krueger DLC that is due next month, and looked at some Mortal Kombat DLC we’d love to have. Some characters that came to mind were Scarface, Michael Myers, and Pinhead. While it’s wishful thinking for these characters, they’re not the only ones that came up in a discussion with the PR team. A lot of ideas have been thrown around and we’re sure you’ve a few of your own, so what legends in the horror and sci-fi world would you want but doubt will come to MK9?

We thought of a few, the two that stood out to us were Chucky (aka Charles Lee Ray) from the Child’s Play horror movie, and Yoda the fictional character in the Star Wars movies. What makes these two characters so different is size, and while the idea of Chucky jumping up and biting the “Family Jewels”, then spitting them out would make a good fatality, the size difference leads to many problems making these characters work in gameplay. The problems do not stop at size, other reasons include the fact that Yoda would never come because Star Wars have their own games franchise. 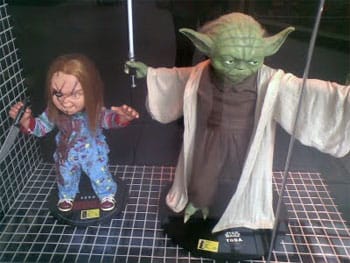 NetherRealm Studios have looked at a number of new characters, which names have included Jason and Michael Myers, although they stated “Freddy Kreuger, we felt, was the most instantly recognizable”. We looked at the idea of Michael Myers in this article.

It seems crazy to think that we are having this bold discussion on non-Mortal Kombat characters being added to a Mortal Kombat game, but we love the sudden change of direction that NetherRealm Studios are now taking the game in with regards to DLC.

Also, contrary what other developers are doing to earn more cash, it looks unlikely that we’ll be seeing some ‘Ultimate’ or ‘Arcade’ version of Mortal Kombat in the future like MvC3, as its seems like NRS are just focusing on making DLC releases frequent, while ensuring that they keep the game fresh and the replayabilty factor high.

It’s a formula that just works for us, so long may it continue. If you have any input for us with regards to future DLC releases, share your ideas below as we’d love to hear them.