We have some breaking news for PS3 owners now, and exciting news if you are planning to pick up the new Mortal Kombat game next year. We’ve just heard that the MK team have managed to get God of War’s Kratos as an exclusive character to the game!

The news has surfaced courtesy of StickSkills, who have obtained their information from the January issue of the Official PlayStation magazine.

Sadly, we don’t have any pictures or videos of Kratos in-game yet, but we can tell you that Kratos will have his own set of fatalities, combat moves and even his own God of War-style arena to fight in.

As a fan of the genre myself, I’m finding it hard to contain my excitement over this one, but let’s not forget that this hasn’t been confirmed by either Ed Boon or NetherRealm Studios yet – it is looking pretty likely though.

Judging by the report over at StickSkills, it looks like Kratos will be on the disc, so players won’t have to buy him as a DLC add-on, unless you’ll need to pick up some sort of special edition for the game to get him – we’ll let you know as soon as we hear details on this.

What is your reaction to the news? No doubt that PS3 owners will be delighted, but what about Xbox 360 owners – are you frustrated that you won’t be able to play as Kratos? You never know though, the MK team may be planning to have a Xbox 360-exclusive character too. Is there any Xbox 360 characters that you can think of that would fit into the game? 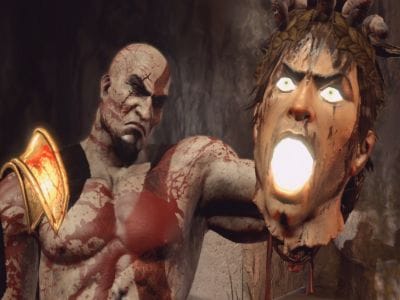 Kratos will have no problem matching other MK fighters in the brutal fatalities department, but what about his combos? We’ve included a video which highlights some of his combos in God of War III which may be included in Mortal Kombat next year. Take a look and let us know what you think of them.