Yesterday we brought you an image which appeared to show the complete Mortal Kombat 2011 character roster list, and it now appears that the image is indeed real and the fighters shown are the core characters that will be available on the disc, with the inclusion of Kratos for the PS3 version as well.

If you haven’t seen the image, check it out again below. It looks like there are 28 fighters to choose from if you include Kratos not shown in the image, while one of the character boxes appear to be a random select option since it shows the same fighter in the bottom left and right corners. 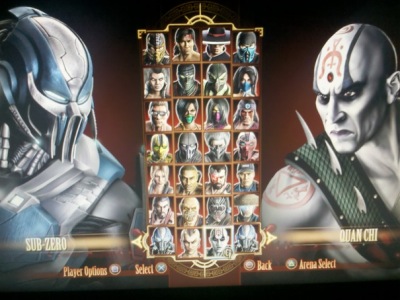 And that fighter is of particular interest as well, as it reveals the inclusion of Cyber Sub Zero – a character whose identity is shrouded in mystery and has yet to be unveiled by NetherRealm Studios. We’re thinking they are pretty annoyed right now since this image has leaked out weeks before the game goes on sale officially.

Anyway, its out there so we may as well discuss what we can see. Out of the fighters shown, the new ones we can pick out (view bigger version here) are Kabal, Sheeva, Quan Chi and Human Smoke – sporting that crazy looking afro. Are you happy with the final choices, or are you disappointed that some characters have been left off the list?

For example, we know that Rain from Mortal Kombat Trilogy is a fan favorite, and if you have Cryax, Sektor and Cyber Sub Zero in there, why not include Robot Smoke as well – he was pretty bad ass in Mortal Kombat 3. Dont forget though, Ed Boon already stated that we would be seeing most of the characters from MK1-MKT so Rain and Robot Smoke may still come later via DLC, just like Kenshi and Scarlet who have already been announced.

Let us know your thoughts on the final roster list, and which character you are going to be using the most.