We have more information for you now on a potential Monster Hunter game for the Sony PlayStation Vita, as it looks like rumors speculating on a release in the latter stages of 2012 may turn out to be true after all. New information from retailers have revealed that the game is on the way, along with other previously unannounced titles for the US.

If you didn’t read our report last week, we told you that a Japanese magazine was reporting that a Monster Hunter game was coming to the PS Vita in Q4 2012. We thought that this may end up being Monster Hunter 4, but a report over at Gematsu shows a screenshot revealing that Monster Hunter Portable 3 is on the way for the US version of the console.

The screenshot lists preview images of all the US launch titles for the PS Vita, but also includes other games that are on the way too. Aside from a listing for Monster Hunter Portable 3rd, we also see details for Final Fantasy X and Lord of Apocalyse as well. This is exciting news for US and EU consumers, as it is the first time that we have seen a near-confirmation of FFX coming to the Vita outside of Japan – although it was pretty much evitable anyway.

Fans have been praying for a Monster Hunter game along with their purchase of a new PS Vita and it looks like those wishes may finally be coming true. We would love it if Capcom confirm the news this week officially, but we have a feeling that this may draw on as a rumor for some time. We have said before that this move is really a no-brainer for both Sony and Capcom, as a Monster Hunter game for the new handheld would surely help Sony to shift hardware units as fans look to get their MH fix on a portable console.

Don’t rule out MH 4 appearing on the Vita in the future, but for now give us your thoughts on Monster Hunter Portable 3rd possibly appearing before the end of the year. Is it about time this happened in your opinion? 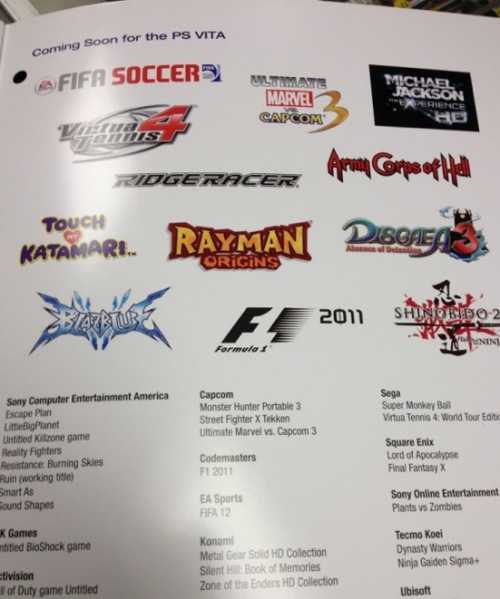