We have some good news for those with a Nintendo 3DS and who are looking forward to picking up Monster Hunter 4. The game is easily one of the most anticipated 3DS titles to release in 2013 and there’s no doubt that PS Vita owners will be a bit jealous that Monster Hunter 4 remains an exclusive title to Nintendo’s handheld. We have some brand new screenshots for you to take a look at, giving you a new taster of the game and a peek at just how impressive the graphics are looking on the 3DS.

It’s fair to say that the PS Vita really needs a big name RPG title to boost sales. We’re a bit surprised that Square-Enix still hasn’t come forward and announced a new Final Fantasy game for the Vita yet, or even re-released a localized version of the excellent Final Fantasy Type-0 game that is still only available in Japanese.

Monster Hunter has a massive following and Nintendo 3DS owners should definitely consider themselves lucky that Capcom has chosen to seemingly make the franchise exclusive to Nintendo for the time being. Wii U will be getting Monster Hunter 3 Ultimate don’t forget in March 2013, while this extended version of Tri will also be coming to the 3DS as well – even more MH goodness for you to enjoy exclusively while PS Vita and PS3 owners can only drool in anticipation. 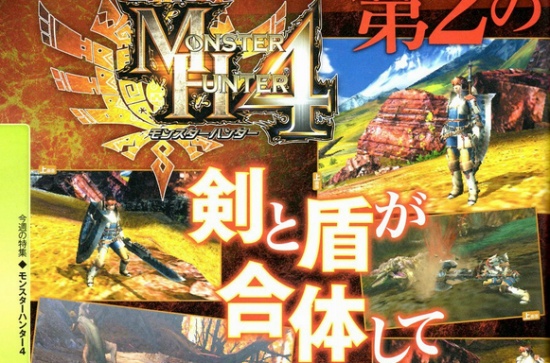 That means that 3DS owners have two games to look forward to, Monster Hunter 4 and Monster Hunter 3 Ultimate – although Monster Hunter 4 is releasing in March for Japan first, meaning that European and US owners will probably have to wait until later on in the year to get their hands on it.

The game has been given a new preview in a Japanese publication and you can view the entire spread at the image gallery here, courtesy of AllGamesBeta who have uploaded the images. You can see just how nice the visuals are looking for a handheld game and it is surely going to keep 3DS users busy for a long time, or perhaps until the next Zelda game on 3DS arrives at least.

Remind us why this game still isn’t coming to PS Vita, Capcom? If you have a PS Vita and are wondering where are all the big name RPGs are, let us know your thoughts on not being able to play any new Monster Hunter games.