With Modern Warfare 3’s release around the corner we can’t wait to join our friends for some multiplayer action, but for the time being we have to make do with Black Ops, MW2 and perhaps even World at War, we recently tried out WaW and we were quite shocked with what we found.

When we started up the game on Xbox 360 (connected to Xbox Live) there was an update to download, which we thought meant that Treyarch’s team were making sure that exploits in the game had been patched – how wrong were we!

The first few games went well and we remember why we loved this game so much in 2008 / 2009, however despite the fact that this game is less than three years old we soon found that the game has been ruined by hackers. I personally love to play Search and Destroy as it adds a bit of tactical gameplay to a game series which promotes run ‘n’ gunning, however when we started up a game on Seelow, here’s some issues we found before we turned the console off.

Firstly hackers were able to display lines of text on your display (see the blurry image below). While we were playing people seemed to be promoting YouTube videos and channels, these URL’s showed up in bright colors and really affected what you could see on your screen. 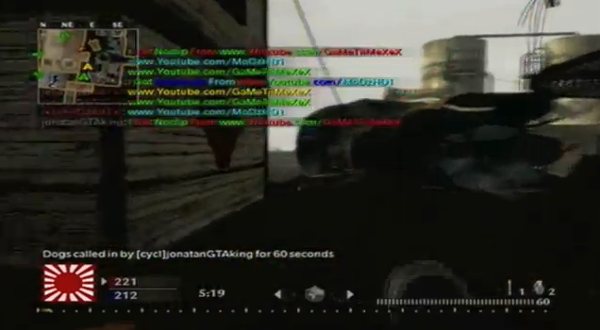 The next thing we spotted was an enemy flying across this map, obviously this completely ruined the game, but that wasn’t the most annoying thin we noticed. When defending locations on Search and Destroy someone started planting the bomb so I stabbed him once, twice, three times, four times…. you get the picture, he was invincible, so after plating the bomb he simple turned around and knifed me – at this point I gave up and turned my 360 off.

Now we know that Treyarch has got other games to concentrate on such as Black Ops and the rumored sequel, but we think its about time that Activision forced some terms and conditions on CoD game developers. Obviously we haven’t got access to agreements which Treyarch / Infinity Ward has reached with Activision, but surely when consumers buy a game they deserve years of support in the way of patches to ensure that the game remains playable.

The main issue with the Call of Duty franchise is the fact that once a new release arrives a large majority of gamers forget about the last, there have already been two CoD games since World at War, so it is no-longer a priority for developers, also the mentality of MOST publishers and developers is money-oriented, who would sooner work on new games than patch previous games. Obviously this is understandable to an extent, but how much would it cost for a company like Treyarch / Infinity Ward to set up a small team of developers to keep existing titles playable, the answer? Nothing compared to the millions of dollars game and DLC sales bring in.

If you check out this link you can see that Xbox Live activity for the week of September 19th shows lots of “Old” titles still being played online, in terms of unique users Modern Warfare 2 came in 3rd, Call of Duty 4 came in 12th and WaW was 20th in the list – this proves that lots of gamers still care about old title, we wonder how much further up the list WaW would be if it devs patched the exploits which hackers are taking advantage of….

Do you think Activision should ensure that CoD developers properly support titles for longer? Or do you think this is all part of the plan to ensure that gamers buy the new games? It’s a great business plan, stop supporting games so people get fed up with the exploits and buy a new game…. what other industry would allow for this?