As Treyarch is not behind Modern Warfare 3 there will be no zombies, which is bad news for lots of Black Ops gamers who love this game mode, however we do know that MW3 will bring a similar game mode which is called Spec Ops Survival, today we finally got to see this in some detail.

We have embedded the official Spec Ops Survival trailer at the end of this post, as an avid zombies fan I must admit that it actually looks pretty good! Obviously as enemy soldiers are a lot more able than zombies the game should have a completely different dynamic to zombies, let’s face it you won’t be able to run around in circles herding up the enemies like you would in a game of zombies, instead you will have to avoid gunfire and other surprises.

So what is revealed in the video? Well watch it yourself for full details but we spotted purchasable weapons and equipment like you get on zombies, also when the weapons armories are online you can buy weapons, ammo and weapon upgrades, not only this but you can share money with your teammate (see image below). This is something which zombies does not allow. 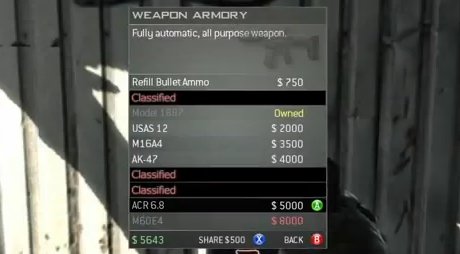 Not only is there a weapon armory but there is an equipment armory as well (see below), this allows you to buy lots of goodies which include C4, Claymores, Flashbangs, Frag Grenades, Turrets and what seems to be perks. Again there is an option to share money and we believe better upgrades will become available the further you get. 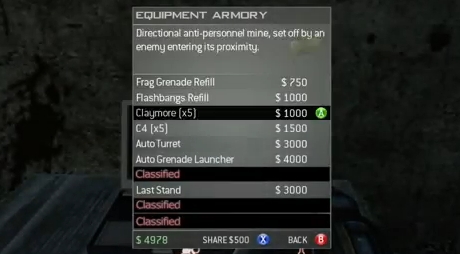 The last armory which we must talk about is the Air Support Armory. Again the video doesn’t reveal everything as some choices are “Classified”, however we can clearly see that you can call in a Predator Missile, a Delta Squad and a Riot Shield Squad – we think it make sense for attack helicopters and artillery strikes etc to be available as well. Again you can share $500 with your teammate if you please.

Towards the end of the video you get to see glimpses of some of the enemies you will be facing, as promised there are attack dogs strapped with explosives, also there will be chemical agents to avoid and finally heavily armored ground forces look to be extremely hard to destroy – these look a lot like the juggernaut enemies which we saw in Modern Warfare 2’s Spec Ops missions.

On the whole as a zombies fan I have to say that the Spec Ops Survival mode looks like great fun and something which will interest me a lot, it is a shame that this is going to be limited to two players, but hey at least there is something more tactical to play than what most Call of Duty multiplayer game modes offer.