Recently whilst browsing the ModernWarfare3 forums we stumbled upon a screen which appears to show the multiplayer title screen from the game’s beta, we cannot confirm whether it is legitimate, but it looks pretty real to us.

After studying the image (embedded at the end of this post) we can see that the title screen looks a little different to what we are used to, also we can confirm that don’t get to access the barracks or create a class sections until level 5, finally it suggests that private beta testing on Xbox 360 version may be underway.

The scrolling banner clearly says “Welcome to the Modern Warfare 3 Beta”, however as you can see the player is not in a lobby with other players, perhaps it is a photoshopped image or perhaps it a very early multiplayer title screen which is not yet fully-functional.

If you check out the comments on the ModernWarfare3Forums yourself there are mix reactions, if it is real it is a great photoshop, if not perhaps we will see some multiplayer beta action at E3 2011, that would be nice.

Update: If you check out this video you can see that the leaked screen was in fact photoshopped.

(You can click on the image for a larger view) 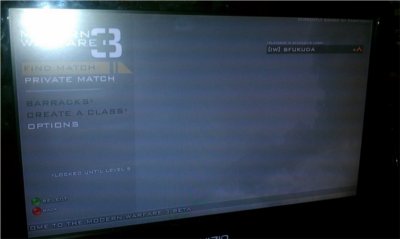