We have a feeling that this could be the work of hackers or simply a photoshop, but we felt that you should be aware of it anyway. A new PS3 screenshot has just gone live, appearing to show a multiplayer beta for Call of Duty: Modern Warfare 3 which is currently being played behind closed doors.

As reported from GamesonSmash, the image has been uploaded by the user mattador4828 and aside from the fact that it reveals the existance of a beta for the still-unannounced game, it also shows that the gamer in question is playing online on a map called ‘Forest’.

Interestingly, Forest was a map which was cancelled in Call of Duty 4, and was discovered via source files hidden in the PC version of the game. This may be the only element of fact in this story though, as the screenshot itself does look dodgy. 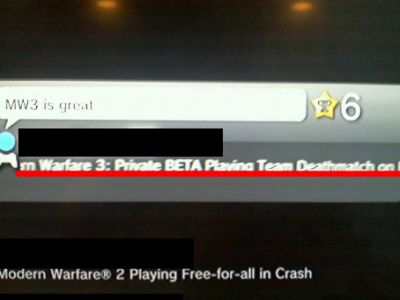 Considering that the security on the PS3 has now been completely blown apart by Geohot and co, it wouldn’t take long for a hacker to quickly conjure up this screenshot to suggest that a beta for the game is real. It’s also worth pointing out that hackers have now taken over Modern Warfare 2 on the PS3, a problem which Infinity Ward has already addressed here.

Firstly, what are your thoughts on the screenshot? Do you think it is real or fake? Due to the fact that we haven’t had any sort of announcement on the game, we are inclined to believe that this is as fake as it gets – but you never know. We’ll update you if we hear anymore on this.