There are so many free apps available for the iPhone; we have to wonder how the developers are able to make their money? Apple thought that it was time that they helped them — as these developers have helped with the success of the App Store. Apple is to introduce Mobile Advertising on the iPhone OS 4.0.

We already know that some of these developers put mobile ads in apps — but we all know how cheap and horrible they look. Apple said that they will help them with these ads, as they still want these developers to offer their apps for free — so do we.

Steve Jobs has also been talking to Google about a better search system instead of using poor apps to do the job. Steve understands how ads in application is the future, explaining that an average user uses an app for 30 minutes a day, so if they decided to show an ad every three minutes, that would be ten ads per day.

If Apple achieves 100 million devices — iPhone, iPod Touch and iPad — then that will a billion ad opportunities each and every day. 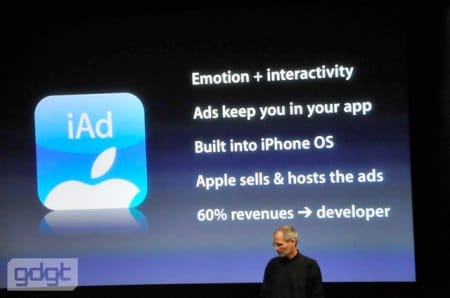 The iPhone OS 4.0 preview for devs can be downloaded now.