We started the day yesterday with excitement for the FIFA 12 demo was releasing on the Xbox 360, PC, and PS3. After a few checks, as well as other gamers, we found out that the PS3 was the only platform not to get the demo yesterday.

This led to popular social networks like Facebook and Twitter being flooded with both questions from PS3 owners, and teasing by PC/Xbox 360 owners. While the Microsoft gamers debated the difficulty of new FIFA 12 features, Sony gamers could only wonder how many hours it would be before they got their hands on the game.

Not all PS3 owners feel this way, some people pointed out that Xbox Live always updates on a Tuesday and the PlayStation Network on a Wednesday, so for them it was expected. What were your feelings of a longer wait for the FIFA 12 demo, which could be up to 24 hours? How did it affect your plans?

We heard from a few people, and family members, that had planned a night of beer and games, only to arrive for the fun and being told that the demo is not on the PS3 yet. While the letdown for some people is not that big a deal, it did annoy others.

One quick check on the official website a couple of days ago would have shown that the PS3 release date and time was always going to be September 14, as you can see by the image below. Let us know your thoughts in the comments. You can also read details on the soundtrack for the game here. 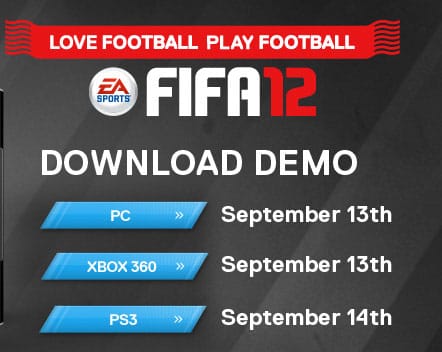