Rumors of the iPhone Nano have started back up once more, and no matter how much I try to disbelieve it, more compelling evidence comes out. Actual facts are hard to come by, and as always is just speculation, but we can tell you that the Mini iPhone 4 or 5 might not be ideal for those with bigger hands.

There is a pattern going on with rumors of smaller Apple devices, not only about the iPhone but also the iPad as well, which might be called the iPad 3. Now I believe that there is more merit to the mini version of the iPhone rather than a smaller tablet, as Steve Jobs has made it clear that this is something that will never happen. However, Jobs cannot deny the fact that a 7-inch iPad would be appealing to a certain market — why not cover both?

There are so many reasons why an iPhone Nano would be good, such as the idea of being able to compete on a more level playing field with Android. However, there is an issue that might need to be solved, how will adults be able to use a mini version of the iPhone? 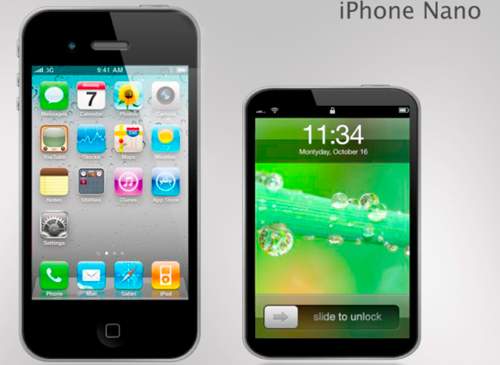 There is a long history of problems with such small handsets; there have been some suggestions of which is the best to use, but have not even seen the current form-factor iPhone appear. I can understand why that is, we have heard many cases in the past where adults with large hands struggle with not only texting but also using the handset in general — imagine if they had the Nano version?

So what kind of specs can we expect to see from the iPhone Nano, well one thing is an edge-to-edge screen; more details on this can be read in Alan Ng’s recent post. Believe it or not there has been a smaller version of the iPhone, but not an official model from Apple. The handset had been available on Amazon, but is currently unavailable.

So we know that there are pros and cons to the idea of a smaller iPhone, but I am sure that if rumors are true then Apple is aware of the risks and benefits of such a device.