The majority of gamers waiting for the Minecraft Xbox 360 update have been waiting ages, and 1.8.2 couldn’t come soon enough, which is shown when some people try and state that there’s at least another week to go. The consensus is that the Minecraft update for Xbox 360 will arrive within the next 24 hours, and this is thanks to some gamers feeling there’s a deadline, although it’s worth pointing out that Microsoft are not always very reliable when it comes to the 2 week testing rule.

We’ve included a couple of images on this page that feature Skin Pack 3 for the Xbox 360 Edition of Minecraft, which more news on this DLC will arrive soon. These skins feature Awesomenauts and Half-Life, so feel free to share a comment on them and also if you’re excited about getting hands-on.

Yesterday we touched on the frustration some people are feeling during the wait for Microsoft to certify Minecraft’s 1.8.2 update for Xbox 360, which the majority of gamers understand any delay now sits with Microsoft and not 4J Studios. Considering we could be just hours away from the official release, we thought a quick post on where to find out if the update has released had been in order. 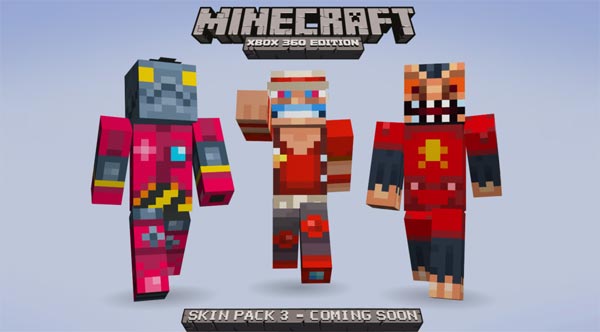 The quickest way to find the release time for Minecraft’s Xbox 360 update — there’s no website that knows what the launch time will be on Xbox, but if you want to find out the moment its released then you will need to use Twitter on your mobile. Find an appropriate app if need be, but from our experience it is Twitter that breaks the news before anyone else and in a more timely fashion.

We would love to state we’ll have the news first that Minecraft’s Xbox 360 update is live, but it will in fact be the Twitter accounts of PlayXBLA and 4JStudios, so bookmark those pages or follow them on Twitter to be one of the first to know when everything is approved and live.

Are you already following these Twitter accounts, and if so how many times are you checking a day? We will of course update PR readers when the Minecraft’s 1.8.2 update goes live for Xbox 360, so feel free to follow us socially as well. We’d love to know if you are checking any other places as well, so feel free to leave some hints for other gamers.