It has been a wait that some gamers won’t want to repeat, but the Minecraft Xbox 360 1.8.2 update is almost here and bringing with it new game modes, although the exact release date is unknown. Most Xbox 360 gamers that own Minecraft know the 1.8.2 update is currently being certified by Microsoft, which could take anything up to two weeks, and while the process started over a week ago it’s still hard to pinpoint a time when the download will become available.

The new modes coming with the next Minecraft Xbox 360 update include Superflat Worlds, a Creative Mode, and a new Tutorial World that will replace the old world and this means saying goodbye to the terrains, structures, easter eggs, and pretty much everything. You can see two videos below that showcase Superflat and Creative Mode, so feel free to see these if you haven’t already and share a comment with your expectations.

Some Minecraft gamers on the Xbox 360 have been worried that the 1.8.2 update could remove their existing worlds, which this topic has been answered directly by a developer with the studio behind the game, Stuart Ross, and his tweet can be seen in the image below. In a nutshell Ross explains that changes will work with old worlds as well, and it is only the “world generation” that’s different. 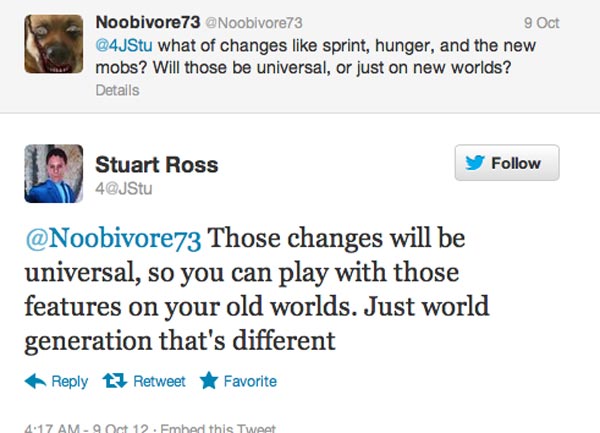 Waiting for Minecraft’s 1.8.2 update on Xbox 360 – a growing number of gamers are starting to feel impatient while waiting for this update, and considering v1.8.2 went into certification with Microsoft on Oct 2, gamers are right to get frustrated nearly two weeks on. The good news is that the average time for Microsoft testing is normally two weeks, so we are almost up on that deadline and this can only mean Minecraft’s 1.8.2 update should hit Xbox live any day now.

We could make a prediction like a number of other gaming blogs are doing, but there’s no point predicting a release date when it’s in Microsoft’s hands now, and also as some gamers quite rightly point out that there’s no point hassling 4J Studios as again they’re not in control now. You could count on the update landing next week considering how long it has been so far, and also no bugs have been reported since testing started with Microsoft. Hopefully the 1.8.2 update will launch at the start of next week rather than towards the end.

Do you feel frustrated waiting for Minecraft’s 1.8.2 update on Xbox 360, or are you relaxed in the knowledge that they’re taking their time and not rushing things? It is hoped that taking extra time means less bugs, although we’ll find out soon enough. See the videos below and let us know how your wait has been.