The digital version of Minecraft for the PS4 was already released, but those of you wanting to own a physical copy of the game will be happy to know it was released yesterday. There are some gamers out there who much prefer to own a game on disc, and so we thought we would have a look at the Minecraft PS4 disc edition price difference from the likes of Asda, Tesco and others in the UK.

First up we have the Minecraft: PlayStation 4 Edition at Asda, and the UK supermarket is asking £15 for the game, which seems about right considering the digital version costs £12.99.

Tesco is slightly cheaper for the disc version of Minecraft on the PlayStation 4 at £14, a saving of a pound. Still not as cheap as the downloadable version, but not bad nevertheless. 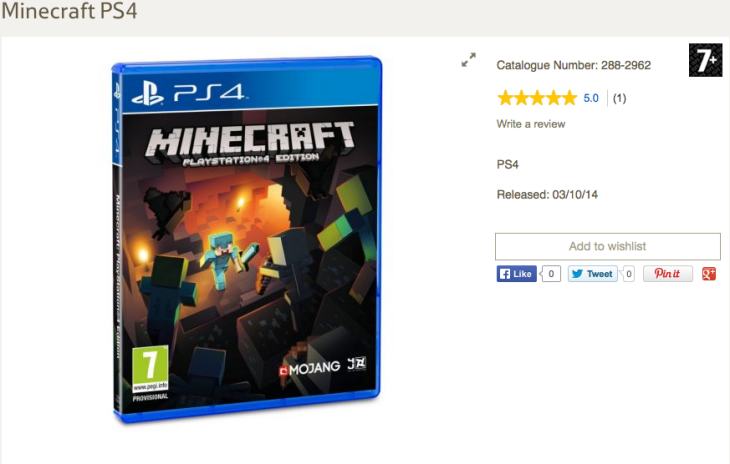 Game is also selling the game in physical form at a cost of £14.99, so a penny cheaper than Asda. It seems strange to see Game not putting a few pound markup on this game, just as they have done with the likes of Middle-earth: Shadow of Mordor.

There seems to be a pattern going on, as Amazon is also asking for £14 for the game. However, if you do want to find it cheaper, then your best bet is to visit eBay, as we have seen examples of sellers wanting much less, although you will need to be careful not to get too involved in a bidding war and set a reasonable price.