While many of us cannot understand the fascination with Minecraft, there is no denying that this simple game has taken the world by storm because of its addictiveness and fun factor. The game was a PC favorite for years, but is now enjoyed on consoles and mobile devices, and it is the latter that will be getting few changes.

Minecraft PE update 0.9.0 is inbound and with it will be a number of much-needed changes aimed at improving the Android and iOS mobile versions. This is to be the biggest Minecraft Pocket Edition update to date, which you can clearly see in the list of changes below.

Some of the most popular Minecraft PE changes in the upcoming update are two-dozen new blocks, unlimited worlds, five extra mobs, updated biomes, and a ton of tweaks and bug fixes to help the game run smoother. 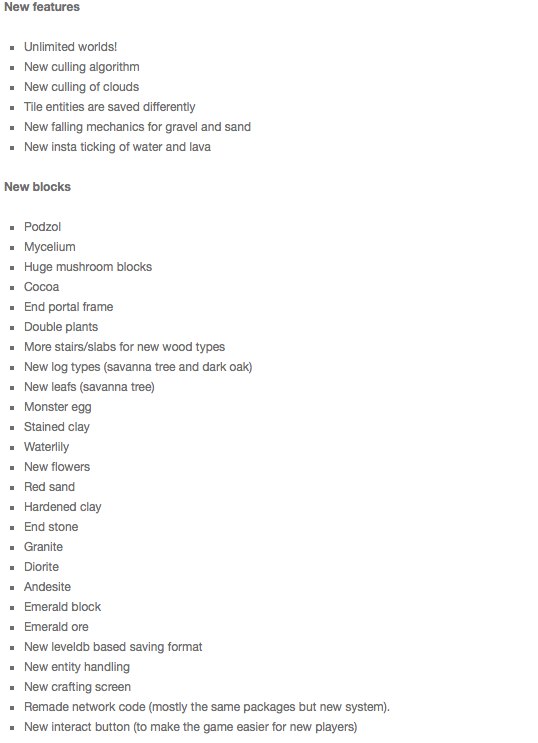 If those changes are not to your liking, then how about new culling of clouds, insta ticking of water and lava, falling mechanics for gravel and sand, all-new AI and so much more.

Other new features and improvements can be seen in the images above, but the full list of Minecraft PE update 0.9.0 changes can be seen on the Mojang website. The Minecraft Pocket Edition update 0.9.0 release date is unknown at this time, but we do know that Android users have a chance of trying the new version out early.

What do you think of the new Minecraft Pocket Edition update?