Most of you will be running Minecraft PE 0.9.5 at the moment, but we could be due yet another Minecraft update as Mojang loves to keep the patches coming. Now we look forward to a potential Minecraft PE 0.9.6 update as we can already bring you some partial notes thanks to hints that the developers at Mojang have shared.

Version 0.9.5 has been deployed as yet another bug fix, with Android users getting the update first once again with Google Play approval process much quicker than Apple’s App Store system.

While we already know that the Minecraft 0.10.0 update is the next major update which will bring player skins to Minecraft Pocket Edition, now we can remind of you other features that could be coming before that. 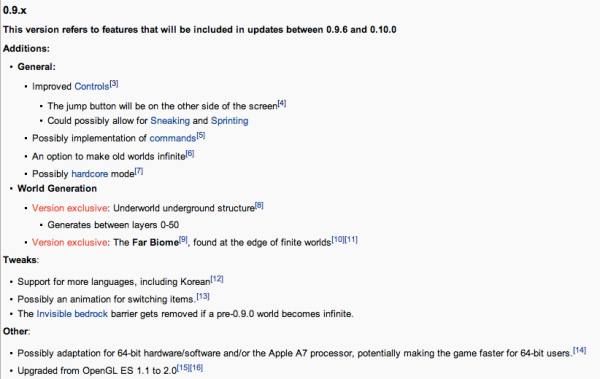 This list has been compiled by the Minecraft Gamepedia page, which is a specialist wiki page devoted entirely to Minecraft. If you highlight the source of the information beside each update detail, you’ll see that each feature has been confirmed by somebody at Mojang – so we know it’s real and on the way.

We can see features such as an improved control system, hardcore mode, implementation of commands and an animation for switching items all potentially on the way.

We say potentially as Mojang has not promised that these with all make it with 0.9.6 – we are just giving you a heads-up on some of the features included on this list that may arrive next.

If you are playing Pocket Edition Minecraft right now, let us know what feature or bug fix you are waiting to see next.