We are happy to confirm that we don’t have long to wait at all until the Minecraft PE 0.13.0 update release date on Android and iOS.

If you haven’t heard, one of the main features of Minecraft PE 0.13.0 is going to be Redstone, with Mojang adding various Redstone related blocks such as Redstone lamps, torches, Tripwire Hooks, Daylight Sensors and Levers.

Now, Mojang developer Tommaso Checchi has revealed on Twitter that the Minecraft PE 0.13.0 update is out ‘sooner than you expect’. 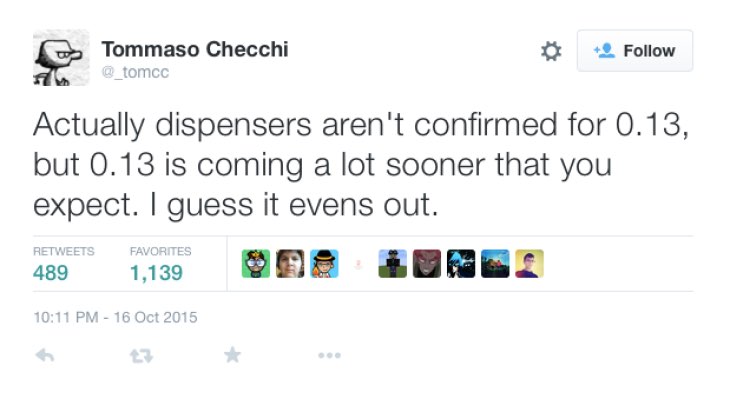 Right now, the game is up to version 0.12.2 on Android and now we could see 0.13.0 pushed out soon after. Note that the Tweet above also confirms that there will not be Dispensers in Minecraft PE 0.13.0 just yet – this will be coming in a future version.

When Minecraft PE 0.13.0 for Android and iOS is out, players will also notice faster boats than before, the addition of the Rabbit and obviously another ton of bug fixes.

Are you excited about the forthcoming Minecraft PE 0.13.0 download for Android and iOS? If so, tell us what feature you are most looking forward to seeing once the new version goes live.