We know that many of you have been constantly asking when is Minecraft PE 0.12.0 out for Android and iPhone. Mojang has been busy beta testing 0.12.1 over the last few weeks but now we do have a solid update to bring you on the official Minecraft PE 0.12.0 update release date in September direct from one of the developers.

The last we spoke about the full version, it was at the end of July when Mojang initially said that they could release 0.12.0 in August – but without Enchanting, music or controller support.

Skip forward to the start of September and it is still not out. As you can imagine, fans have been growing frustrated with the wait, although the excitement and anticipation still seems to be high overall. 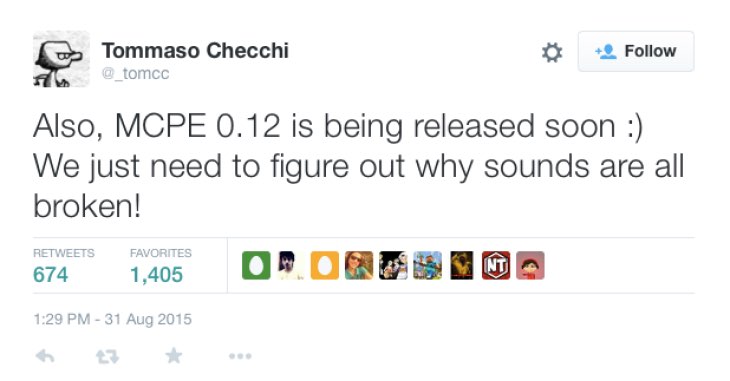 Now, developer Tommaso Checchi has said that Minecraft 0.12.0 will be coming ‘soon’, once the team have fixed up some bugs relating to sound issues.

Minecraft PE has forever been synonymous with bugs, so most of you should be used to the constant delays now after being optimistic on past occasions.

Given that the update was supposed to come in August and judging by the Tweet above left just a few days ago – a September release date for Minecraft PE 0.12.0 on Android and iPhone should be confirmed.

Are you patiently waiting to play this version? Let us know what you want to see the most once the Minecraft 0.12.0 download is live.