We have some more Minecraft PE news to bring you now, following on from our previous report in which we told you that Minecraft PE 0.11.0 was now in official development from the Mojang team.

This week, it looks like the developers are once again promising to deliver on Minecraft PE 0.11.0 Skins, after failing to come good on their initial promise of putting Skins into Minecraft PE 0.10.0.

Now though, it seems like it is definitely happening. Johan Bernhardsson and Tomasso Checchiare are the two main Minecraft Pocket Edition developers that have been the most vocal on Twitter. 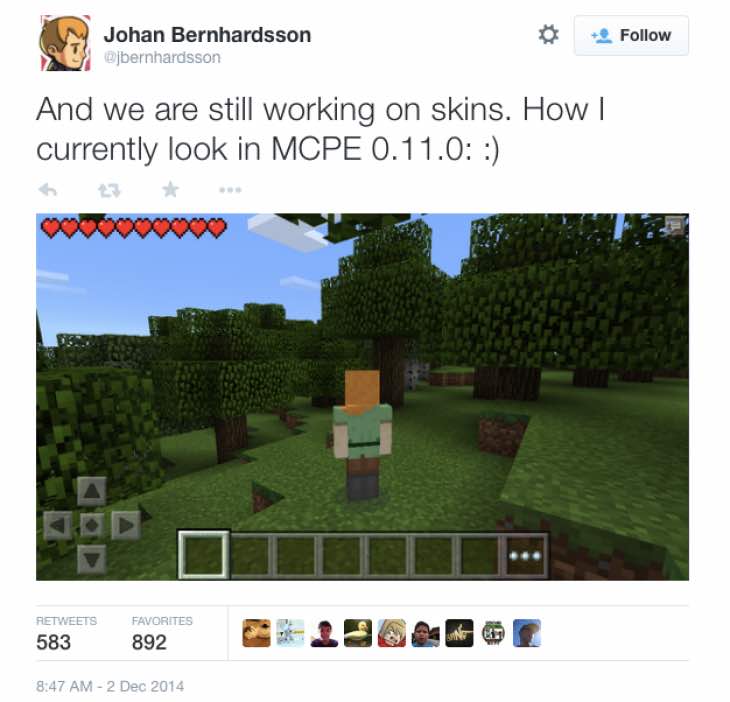 They have both teased the fact that Skins are coming with the next Minecraft PE update, with Johan Bernhardsson even going as far to show off a skin of himself running in the Minecraft PE 0.11.0 build as you can see above.

Hopefully this the best confirmation so far to suggest that skins are definitely going to be in the next update. Put it this way, Mojang are going to attract some criticism if skins aren’t in Pocket Edition soon given the wait.

Also, we wonder what the odds are on Mojang managing to get the 0.11.0 update out before Christmas. It makes sense from a logical point of view, given that they have raced through the previous updates in recent weeks.

Are you happy that Minecraft PE 0.11.0 Skins is finally confirmed? Let us know what other features you want to see in the next major update.