We’ve already told you that the highly anticipated Minecraft PE 0.11.0 update release date won’t be arriving until March at the earliest – that info coming from Mojang themselves.

We’ve also told you that when it does arrive, some of the new Minecraft PE 0.11.0 features will include player skins, boats, squid and possibly poisonous spiders.

Now, we have had confirmation from one PE developer who has said that Minecraft PE fishing is also in development at the moment. 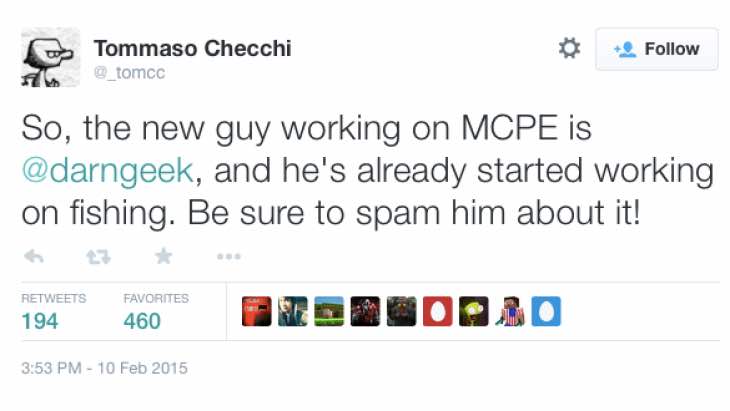 Above is the evidence from Tomasso Checchi, who has informed his followers on Twitter that a new member has joined the team and is working specifically on the fishing aspect of the game.

This should be very exciting for those that have enjoyed the fishing feature on PC versions of the game. To remind you, you’ll have the chance of catching various types of fish but also rare treasure as well if you are lucky.

Some of the fish will include Salmon, Pufferfish and in very rare cases Clownfish as well. Hopefully we’ll get some screenshots of fishing on Minecraft PE for you soon.

In the meantime, give us your reaction to the fact that fishing is coming to the Pocket Edition – is this great news for you personally?