Although iPhone and Android users are patiently waiting for Mojang to deliver news about the upcoming Minecraft PE 0.11.0 update, it looks like we have a piece of good news to deliver for Android users at least.

As most of you know, Mojang will always deliver their new Minecraft Pocket Edition updates first on Android, as there is no approval process needed – compared to on iOS where it can sometimes take weeks for an update to be approved.

Considering that it has been months of waiting for 0.11.0, we now have some positive news for Android owners, as one developer has said that the Minecraft PE 0.11.0 beta for Android is coming ‘soon’. 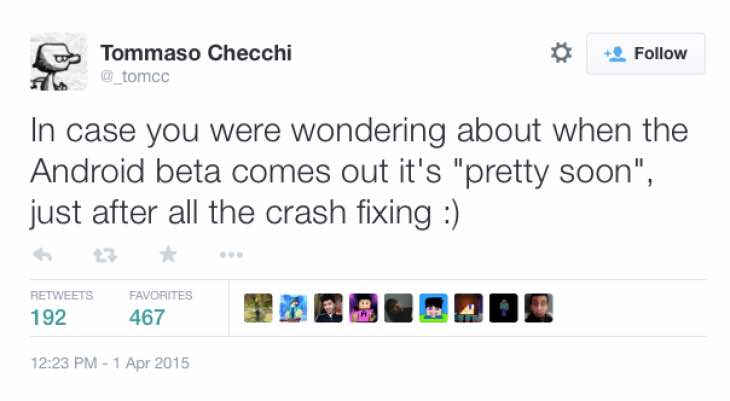 Above is a recent Tweet from developer Tommaso Checchi, who reveals that Android players will be getting a beta ‘pretty soon’, which is great to hear after weeks of silence.

As usual though, the stumbling block is bugs as he also says that crash fixing is their priority at the moment – but once that is done, the beta will arrive.

With this information in mind, we have a feeling that Android players will be playing the Minecraft PE 0.11.0 update sometime in April. Hopefully it won’t be long until those on iPhone get the update too.

If you are playing on Android, give us your thoughts on this – are you excited to be able to play the 0.11.0 PE Minecraft beta ‘pretty soon’?