As we have told you in the past, all eyes are on Mojang with regards to the highly anticipated Minecraft PE 0.11.0 update release date. The developers had previously said that no new patches would be out before the next major version, but we have since seen this stance change as a surprise new Minecrat PE 0.10.5 update for Android has arrived.

Within the last few days, Mojang has already released this update on Android devices. However, we can tell you that this update is exclusive to Android and won’t be made available on iOS.

This is due to the fact that it is a very minor update and we’re guessing that Mojang didn’t want to go through the full process of having the update approved by Apple’s App Store. 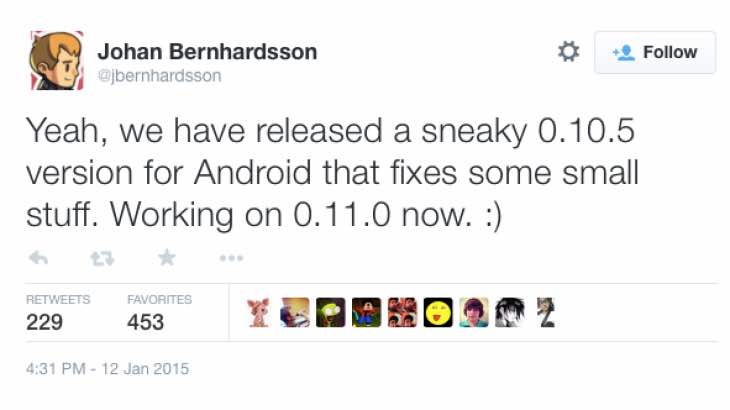 Because it’s a minor update, we don’t even have the Minecraft PE 0.10.5 update notes as developer Johan Bernhardsson confirms that it is very minor in detail.

They are still working on the Minecraft PE 0.11.0 patch in the meantime and we can only presume that it is days rather than weeks away from release.

Android users can get this update now. Let us know if you have spotted anything different in the game compared to 0.10.4.