We have some great Minecraft PE news to bring you now, especially for iPhone players who have been kept out of the loop with regards to the Android exclusive Minecraft PE 0.10.0 beta. We now have confirmation from Mojang that the Minecraft PE 0.10.0 update release time on iPhone and Android will be coming very soon, subject to approval from Apple of course.

We have been keeping you up to date with all the Minecraft PE 0.10.0 news, since Mojang has been pushing out new beta builds in record time. 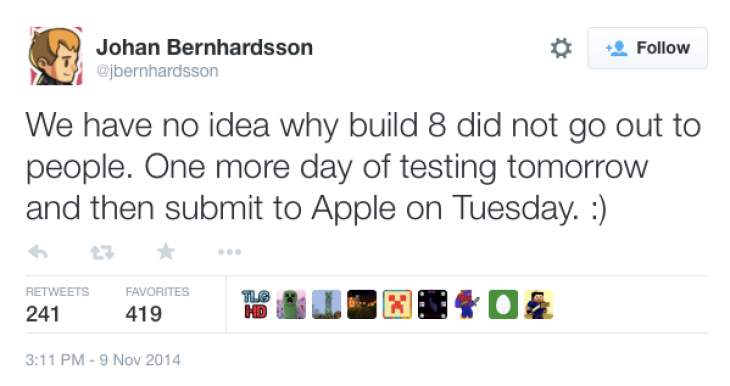 Mojang developer Johan Bernhardsson has confirmed the news as you can see in a Tweet above, which also obviously confirms that the Minecraft PE 0.10.0 final update for Android will be happening on Tuesday as well.

The only danger of course, is how long Apple needs to approve the update. We have seen in the past that approvals have taken longer than expected, even forcing Mojang to skip versions and bring out another version just to bypass the previous one due to Apple’s system.

Hopefully we will have no issues with the 0.10.0 rollout though and you will all be enjoying the final version later on Tuesday. Are you excited about this? Let us know what Minecraft PE 0.10.0 features you are most looking forward to seeing.

Don’t forget to check out some Minecraft PE 0.10.0 seeds here in advance!