Remember that the Minecraft PE 0.10.0 beta is now live on Android, meaning that users now have the opportunity to play the latest version early whilst at the same time giving Mojang crucial bug reports – a win win situation.

It may also be a blessing in disguise for those that are still unhappy that the beta is only available on Android, not iOS. It looks like there are still a vast amount of bugs that Mojang are working through with 0.10.0, so if you think about it iOS users will be getting a bug-free experience (we hope) when the final version is available to download. 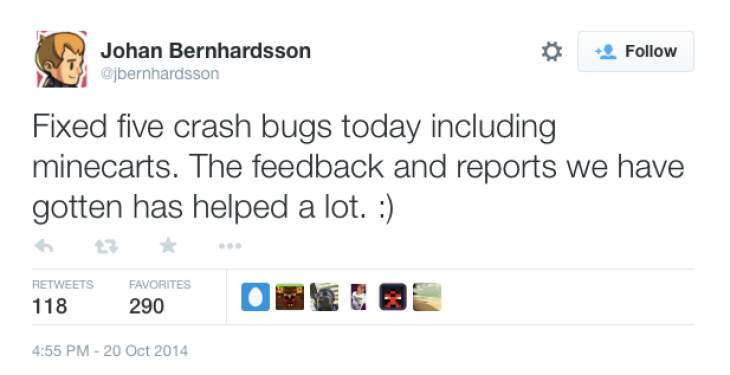 At the moment though, one Mojang developer has just informed the community about his joy in fixing up one major 0.10.0 bug. The team had discovered that Minecraft 0.10.0 was crashing in relation to minecarts, but thankfully it looks like this has now been fixed.

The Minecraft PE 0.10.0 release time appears to be very close, but it looks like Mojang are carefully ensuring that they do not open themselves up to another bug fest as which we see with almost every release.

Are you playing the beta now? Let us know what Minecraft PE 0.10.0 bugs you have personally spotted.