We have heard from a number of people over the past few days in regard to the Minecraft 1.7.6 update release window and problems with 1.7.5. The next update will be coming this month, although an exact release date hasn’t been given just yet and we’ve also had a couple of emails detailing issues with the latest patch.

What we know so far, the planned release date for the Minecraft 1.7.6 update is “shortly after March 21st, 2014”. There will be a number of skin changes and support for name changing will be added with this new version.

You can see some details on the changes planned in the screenshot below, although it is worth noting that these updates are subject to change and the name changing is likely to only be support for changing names, so this could mean you might need to wait until Minecraft update 1.8 for being able to change names fully. 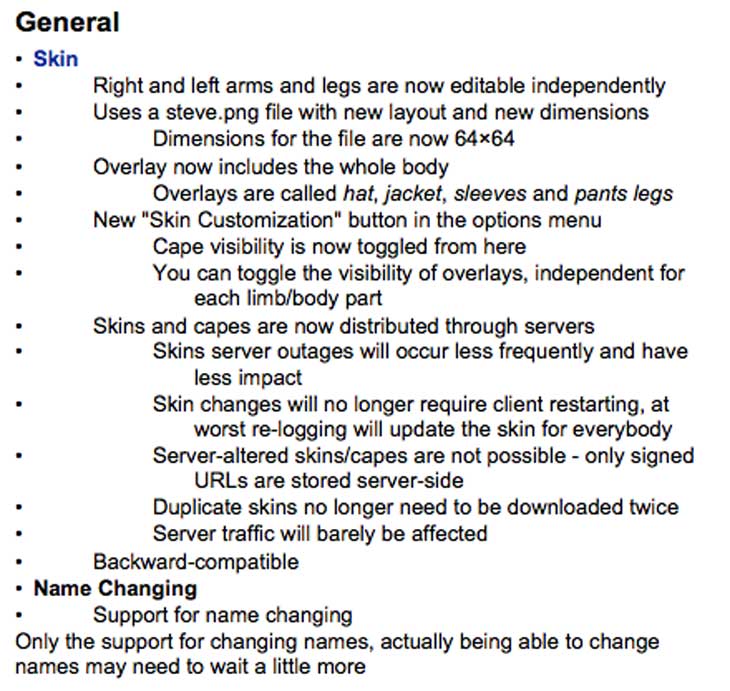 Minecraft name change worries – one Product Reviews reader had this to say recently about name changes, “If I change my name, then would this remove my ranks, stats, and friends list or will they have this covered”. While we haven’t heard anything official, it is expected that everything will be fine thanks to each user having a code with stats saved to that code.

For those of you wanting to learn a little more about the Minecraft v1.7.5 update, you should take a look at the couple of videos we embedded below. The first gives some insight into the current version, and delivers a little bit of news regarding the upcoming Minecraft 1.7.6 and 1.8 updates. The second video shows the mini-game feature quickly.

In a nutshell, the 1.7.5 patch added mini game support with Minecraft Realms, gets ready to bring more countries to Realms, and adds a number of server-side bug fixes and performance improvements.

What problems do you have with the current version of Minecraft, which you feel need fixing in the 1.7.6 update?

We will let Product Reviews readers know when the Minecraft 1.7.6 update is live, so keep connected to our social channels for the news as it breaks.