We have a welcome update to bring you now on Mighty No 9, the ‘spiritual successor’ to Megaman from original creator Keiji Inafune.

Since the Kickstater camapign ended though, there has been some major developments to the way in which the game will be launched – developments which we can see gamers are not very happy about.

It’s confirmed that Mighty No 9 has now reached additional financial backing from publisher Deep Silver, with the major conclusion to that being a physical retail copy of Mighty No 9 on all platforms.

Going back to the initial Kickstarter stretch goals, one of these goals specifically was the following: “Donate $60 or more for a Physical game box, printed retro style game manual and an exclusive in-game golden hero”. 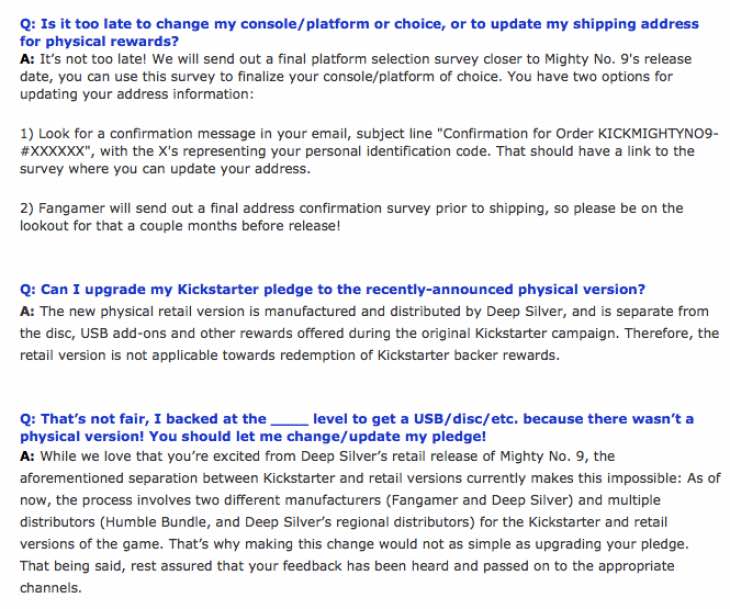 Now, we can remind you that there were 7289 backers on this particular stretch goal. It’s no secret that many of these backers pledged their money towards the game under the assumption that there would be no publisher and this was the only way to own a physical state of the game for collection purposes.

Skip forward to the present day and you can imagine the horror when the game is now being published and will have a physical disc copy for $29.99.

As you can see from the text that we dug out from an official Mighty No 9 FAQ, those who backed the digital copy cannot upgrade to a physical retail version of the game.

Comcept states that it’s actually ‘impossible’ for that to happen, given the fact that there are now multiple manufacturers and distributors involved between the digital and retail versions of the game.

As you can imagine, there are many frustrated gamers out there who just wanted a physical copy of the game, backed the project anyway for the physical ‘collectors box’ but now can’t even get the physical version now that it has been announced.

Anyone else in this situation right now? Give your thoughts below.