LOTR fans in the UK had to wait longer for the release of Middle-earth: Shadow of Mordor, but at least they can finally head to their local retailer store stocking games to take possession of a copy. There are several places you can purchase the game from in the UK, such as Asda and Tesco being the most popular due to longer opening hours. However, there are still places like Game to consider, and possibly even Argos.

The Middle-earth: Shadow of Mordor price in UK stores vary more than you would think, and even though it is only by a few pounds, it will make all the difference, although it does depend on which platform you need it for. 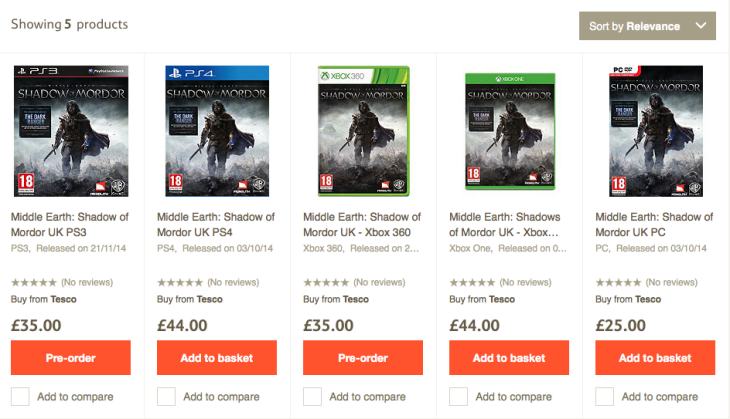 Middle-earth: Shadow of Mordor price at Asda – There are four platform options for you to choose, those are the PS3, Xbox 360, PS4 and the Xbox One. The prices are as follows, £37, £37, £44 and £44 respectively. That seems like a huge price difference between the two generations, but that’s the price you pay for progress we guess.

Middle-earth: Shadow of Mordor price at Tesco – The price for the Xbox 360 and the PlayStation 3 versions are £35, so £2 cheaper than above, and £44 each for the Xbox One and PS4 consoles, which is the same as Asda. Unlike its rival supermarket, Tesco has the PC version at a price of £35.

The prices at Game are a bit more expensive, although this is because they are the Middle-earth: Shadow of Mordor Special Edition versions. Prices are £45 for PS3 and Xbox 360, and £55 for the two new-gen consoles.

Finally, we have Argos, who wants around £35 for previous gen and £47 for the new generation versions.

There you go, a rundown of the prices you will pay for this awesome new game. Did you manage to find Middle-earth: Shadow of Mordor cheaper anywhere else?