We we just told you moments ago, the PS4 4.0 system software update is now live adding a lot of cosmetic changes to the PS4 UI but perhaps more importantly, bringing the new PS4 ‘HDR’ or High Dynamic Range feature to the system.

This is one of the main features of the upcoming PS4 Pro console which will arrive in November, but Sony shocked gamers and the tech world by announcing that PS4 users will also get it for free.

Inevitably there has been questions raised about this from a technical standpoint, but also fingers pointed towards Microsoft who are making gamers pay for the Xbox One S to enjoy HDR. 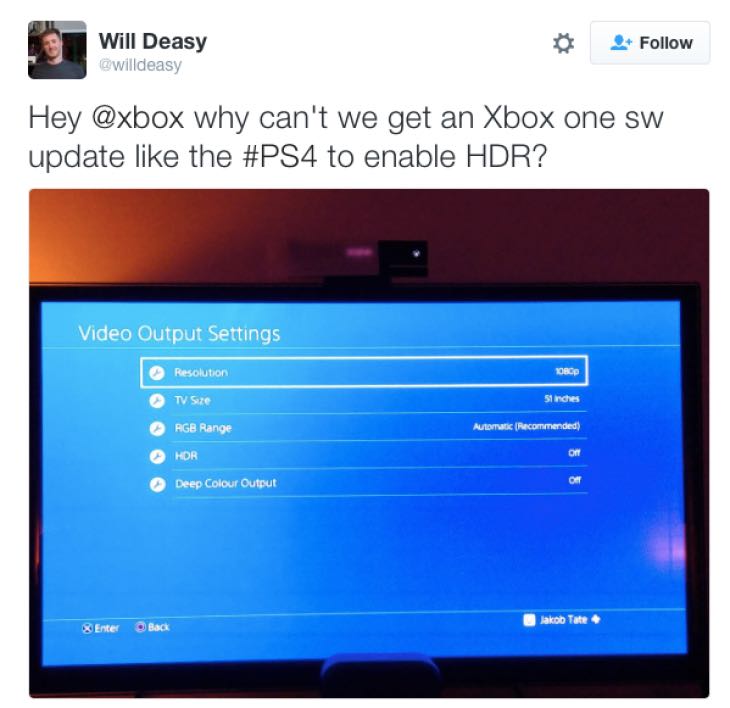 You can see one Xbox One owner ask the same question in a recent Tweet above, but then again what kind of HDR are Sony exactly offering to PS4 users?

The general feeling is that true HDR requires a HDMI 2.0 output, which we all know isn’t possible since the PS4 uses HDMI 1.4. Sony isn’t going into specifics on how the PS4 can handle HDR, but does it really matter if PS4 games will still look better with the HDR option enabled?

Give us your thoughts on this, on both sides of the argument. Are Sony staying silent because they know it won’t be true HDR gaming?

Should Microsoft take any blame by not giving Xbox One users a free HDR update?