It is no secret that the last three years have not been great for Microsoft’s Windows Mobile OS, however a recent chart posted on SlashGear really brings home how much the market has changed at Microsoft’s expense.

The chart (which can be seen at the end of this post) shows that at one point Microsoft held a U.S. marketshare of smartphone subscribers of around 38% (in late 2006 early 2007), however in December 2009 they held a rough share of around 18%.

In December 2006 Apple didn’t hold 1% of the marketshare, however since the release of the different iPhone versions they have shown steady growth which reached a share of around 25% in December 2009.

With the release of Windows Phone 7 Microsoft will be hoping to improve their marketshare, I feel that it may improve throughout the year, however I doubt it will overtake Apple again anytime soon. What do you think? 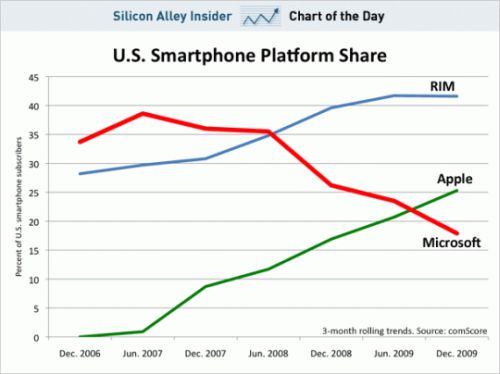