It looks as if Xbox 360 gamers could be in for a treat at CES 2011, a leaked snapshot from Microsoft’s keynote suggests that M$ will reveal Avatar Kinect during their keynote at the show.

You can see the leaked photo below, it clearly shows Avatar Kinect, which is said to be a Kinect-powered way of controlling a gamer’s Xbox Live avatar and interact with others. 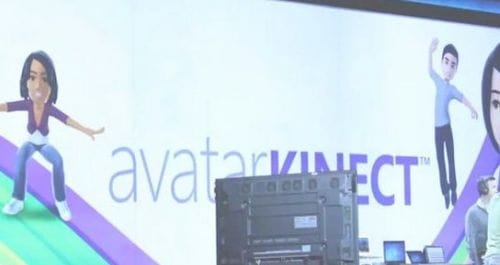 From what we can see Steve Ballmer will kick off Microsoft’s keynote tomorrow at 6.30pm PST (Wednesday, January 5, 2011), therefore don’t be too surprised if Avatar Kinect is introduced pretty early on.

It is thought that Avatar Kinect will be similar to Nintendo’s Mii channel, also SlashGear suggest that it will be free and will arrive as part of an Xbox Live update.

Kinect sales have been impressive therefore I am sure that there are a few million gamers out there who will welcome Avatar Kinect, it is not a feature which interests me, however younger Xbox 360 gamers will undoubtedly have hours of fun with the new features and functionality.

Other details are understandably scarce at the moment therefore we will try to reveal more tomorrow during the keynote, so check out Product-Reviews in 24 hours time for all of the latest juicy details, or perhaps follow me on Twitter.