When it comes to choosing which tablet is the right one for you, the expected battery life is an important fact that must be considered. We are used to seeing tablets that have batteries that last upwards of 8 hours, as does the Microsoft Surface RT, but how about the upcoming Surface Pro due to hit the market in early 2013?

Below you can see a tweet from a few days ago direct from the official twitter page for Microsoft Surface, where they made it clear that the battery life for the Pro will be approximately half that of the Surface RT. Whilst this at first glance seems a shocking claim, after a closer look it’s easy to see how this could indeed be the case. Most people would’ve noticed the Microsoft Surface Pro specs sheet revealed some insight into the battery life, which stated “42 W-h” and this compared to the RT at “31.5 W-h“, so it had been clear that the juice would be less on the Pro model. 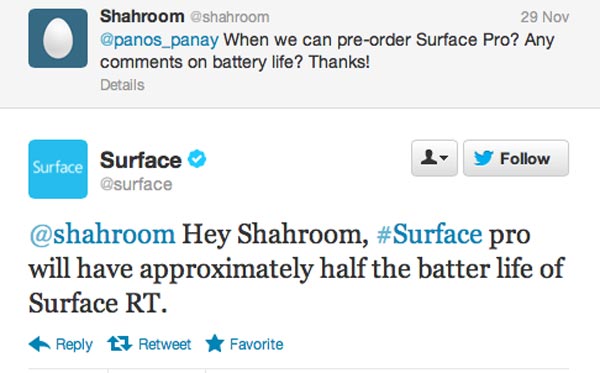 One reason for this would be the difference in horsepower between the two models, with the Microsoft Surface Pro featuring a 3rd Gen Intel Core i5 compared to an ARM-powered processor on the RT model. The extra power on the Pro comes at a price of battery life, which most people would expect after looking at the specs sheet.

Are you happy to sacrifice battery life for extra horsepower with the Microsoft Surface Pro? There’s a lot more on the Pro model than just a more powerful CPU, which you can see in our specs comparison here, although we wonder how much value some people put on battery life, especially considering around 4 hours isn’t a lot these days for portable gadgets. If you really want the Surface Pro, let us know in the comments what you like about it the most?