You can see the look inside Microsoft Surface here, or look below at a number of photos revealing part of this process in action. The reviewer even gives you a step-by-step guide for taking the new tablet apart, but strangely they also warn users not to use their instructions as a way to disassemble the Microsoft Surface tablet. We’re sure some people will brave it, but this would obviously be done at their own risk.

If you want to see how the iPad 4 vs. Microsoft Surface compare then you can see our visual review here, which is supported by a few videos taking a more in-depth look at the operating system behind the Microsoft Surface tablet and also a closer look at the 4th generation iPad. It is worth noting that the iPad 4 has been up for pre-order, although there won’t be any full hands-on reviews just yet until it sees a release date next week. You can also see an early look at the Apple iPad mini from the weekend that compares the 7.9-inch tablet with the Google Nexus 7.

Google had to cancel their event that had been scheduled for yesterday in New York, which had to happen thanks to Hurricane Sandy although they did update their blog with all the details. This had been the wish of fans that didn’t want to wait until Google had time to plan another press event, so feel free to check out the full Google Nexus 10, 7, and 4 details in this article. 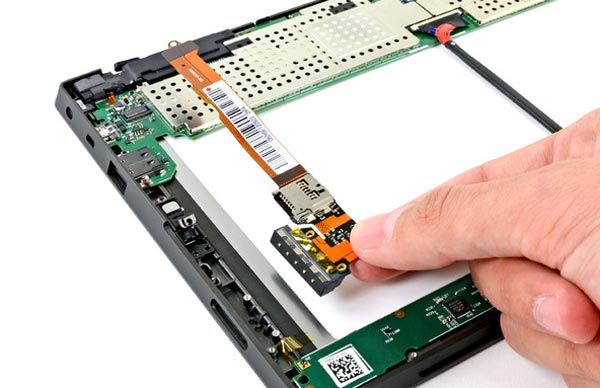 We’ll be sure to publish a full Microsoft Surface review roundup at a later date, but for now take a look at the teardown via the above link and let us know if you’re thinking about purchasing the Microsoft Surface tablet?