It was seven months ago when Microsoft held its Surface 2 liveblog and now we have another Surface event date for May 20th, although we are told this will only be a small gathering — whatever that means?

The Microsoft Surface event for this month will take place in New York and while Microsoft has not let anything slip as to what they could be announcing, we believe, or hope that there will be a Surface mini tablet announcement.

If you would like to know what the event is about, then the Surface event start time for 2014 is 11 am New York time, and you will be happy to know that the likes of Engadget will be there, although we expect many more 2014 Microsoft Surface live blogs. 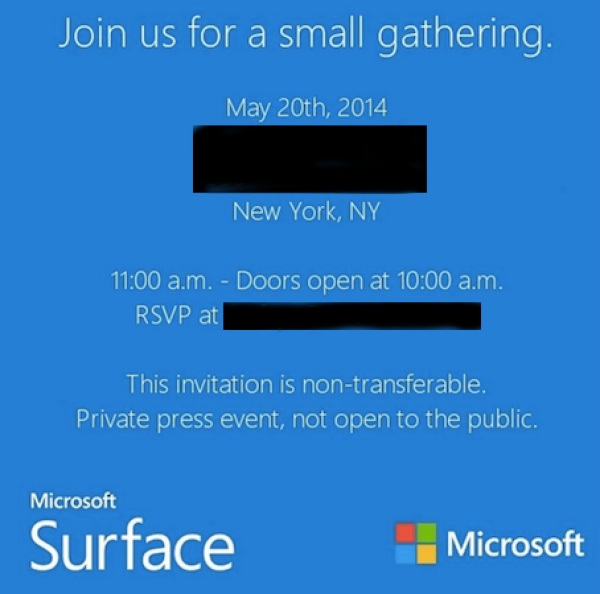 Even though we have an idea that the Surface mini could be unveiled later this month, there is also speculation of the much-rumored Surface phone, or even the Surface 3 tablet.

It would make sense for Microsoft to introduce a smaller Surface tablet because the Nexus 7, iPad mini, Samsung Tab 7 and Kindle Fire HD tablets are all very popular still, and so it would be interesting to see just how well Microsoft would be able to compete in such a competitive market.

As for the Surface Phone, while this is an intriguing idea, why would Microsoft do such a thing when they have recently purchased Nokia?

What do you think the 2014 Microsoft Surface event will be about, the Surface mini, a Surface Phone, or possibly an early look at the Surface 3?